Nik Richie, publisher of the suddenly essential gossip website The Dirty.com, made it very clear in an interview last night that he does not "want to be crude." But today, for the good of America, this brave patriot has made the difficult choice to publish more graphic photographs of Anthony Weiner's junk. In a note accompanying the rather well-documented genitalia, Richie makes it very clear that this "WORLD EXCLUSIVE" crudeness is not some crass grab for pageviews, but because the future of the United States hangs in the balance. For real:

There comes a time for people to dissolve the political bonds which have connected them with self-absorbed, perverted politicians. New York City, now is that time! As the flagship city of the United States, you must use this as an opportunity to tell the world that dirty politicians like Anthony Weiner don’t deserve to represent you.

Today is the first time in our company history that TheDirty.com has published extreme nude images without censor because New York deserves better leadership than this. Let your voices be heard and demand that Anthony Weiner aka Carlos Danger withdraws immediately from the mayoral race. Now is your time, your opportunity to positively shift the focus of the mainstream media and the culture of politics in the United States.

As it happens, Gothamist has obtained WORLD EXCLUSIVE video of Richie in the The Dirty office, moments after clicking publish:

And if you're wondering what Richie was so reluctant to "be crude" about during last night's interview, it has to do with Carlos Danger's allegedly disappointing performance during phone sex. According to Richie, Sydney Elaine Leathers "told me in discussions that the phone sex was not good with Anthony Weiner, because he would um — what do you say — have his orgasm — I don't want to be crude — within a 30 second period, so she would never have the opportunity to get off."

No siesta for Weiner.

Efficiency, Leathers, efficiency. And this just in, at a press conference today Weiner reportedly said "it's six to ten (women) I suppose" in total, and "no more than three" after he resigned. We'll share more lovingly photoshopped cockshots as they surface. To be sure, Gothamist publisher Jake Dobkin doesn't want to be crude, but reached for comment he tells me, "figuring like 5 dick shots per girl, we could be talking enough dick shots to do one each day until the election, like a Christmas advent calendar."

Not to be outdone, TMZ obtained some more provocative photos of Carlos Danger paramour Sydney Leathers, who told TMZ she sent the pics to Weiner in July 2012. We are publishing one here because fuck it fuck it all America. 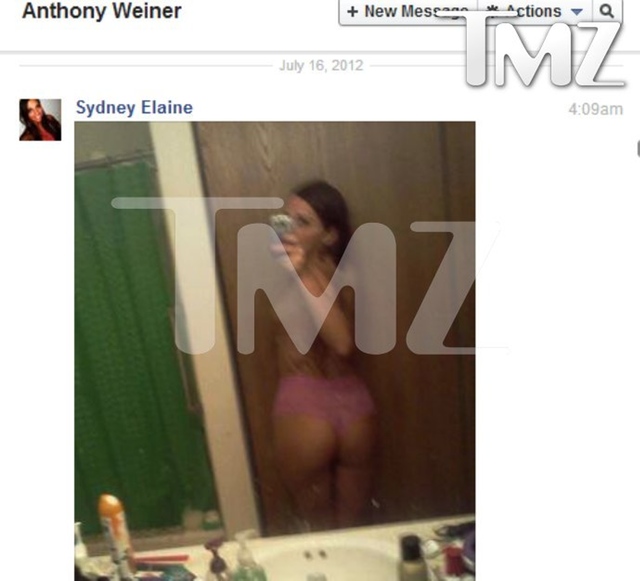