Step Out of the Subway and Know Which Way is Which 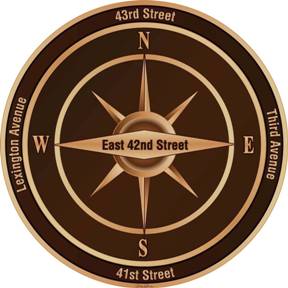 If you've ever struggled to figure out which direction you're facing when you step out of a subway station (and there are no landmarks or sun to guide you), you won't have those problems at four subway stations in Midtown anymore. That's because the Department of Transportation and the Grand Central Partnership are placing temporary directional compass decals outside them.

DOT Commissioner Janette Sadik-Khan explained, "Not a single person, native New Yorker or visitor, can truthfully claim that they have not, at least once, been confused as to which direction to walk when emerging from a subway station." The decals, funded by the GCP, were suggested by a resident, as reported in the NY Times. Here are the locations:

The GCP is asking for feedback about the compass decals, which were designed by artist Gregg LeFevre, (take the survey here) by this Friday, October 19, and then the DOT and GCP will determine whether to make the compass directionals permanent. And if the decals are well-received, then the DOT will work with other business improvement districts to bring these to their neighborhoods.

What do you think of the idea? Where would you want to see these compasses?