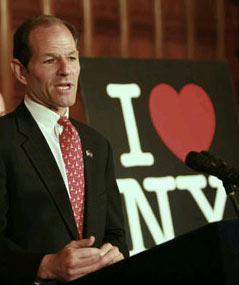 After heated debate and almost universal dislike from both parties and many NY residents for his controversial driver's license plan, Governor Spitzer has decided to shelve the idea. He is expected to announce the news today during a meeting with the Democratic congressional delegation, whose recently elected members have criticized the Governor for putting their positions in jeopardy with voters.

The Governor spoke to the NY Times, "You have perhaps seen me struggle with it because I thought we had a principled decision, and it’s not necessarily easy to back away from trying to move a debate forward," but then admitted the opposition seemed great. "I am not willing to fight to the bitter end on something that will not ultimately be implemented. and we also have an enormous agenda on other issues of great importance to New York State that was being stymied by the constant and almost singular focus on this issue.”

The Governor first offered a plan that would give illegal immigrants a chance to get driver's licenses in September, explaining that it would encourage illegal immigrants to get insurance and be a part of the system. But after outcry, he revised it to a "three-tier-plan" in October that would have created a less broad driver's license for immigrants as well as make U.S. citizens get the Real ID, a Homeland Security license that even Spitzer's Homeland Security head criticized earlier.

Some sample reaction from pols: Assemblyman Peter Rivera (D) of the Bronx said, "He created a tremendous amount of hope and now he has let the air out of that hope. I certainly hope this does not help him in the polls. It's a tremendous blow to all immigrants. I supported him until I saw his backbone disappear." But Assemblyman James Tedisco (R) of Schenectady proclaimed, "This announcement is a huge victory for New York and all Americans."

The Post and Daily News have editorials on Spitzer's turnaround (the Post covers his free fall while the Daily News suggests he spend year 2 of his governorship on "jobs much higher on the state's priority list").And yesterday, Siena College released new poll numbers for the Governor, which revealed his favorability/unfavorability ratings dropping from 54/36 in October to a current 41/46.