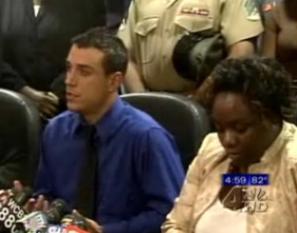 The family of Gregory McCullough, the tow truck driver who suffered third-degree burns over 80% of his body from the Midtown steam pipe explosion, had an emotional meeting with the man who helped him. Junior Suarez, a 27-year-old who works at an employment agency, broke down as he described McCullough's pain,"He was just screaming and screaming and couldn't stop screaming."

McCullough's mother Tanya McCullough-Stewart said, "We were just thankful that someone was there to hold him, and that he wasn’t suffering by himself," and added it was "devastating" that her 23-year-old son was so injured. The family announced it would be suing Con Ed and perhaps the city for negligence. One of the lawyers retained by the McCullough family is Kenneth Thompson, a former prosecutor who worked on the Abner Louima case; he said, "There is a history of problems at that intersection."

You can see video from the press conference here; Suarez comforts McCullough's mother at one point, and then when Suarez is crying, McCullough's stepfather tries to comfort him. And apparently McCullough, though in pain, had helped his passenger, Judith Bailey, out of the truck. Bailey has burns over 30% of her body; she, like McCullough, is at New York Hospital's burn unit.

#abner louima
#con ed
#explosion
#Gregory McCullough
#history
#hospital
#Judith Bailey
#Kenneth Thompson
#midtown
#Midtown steam pipe explosion
#new york
#New York Hospital
#stewart
#the city
#video
Do you know the scoop? Comment below or Send us a Tip
A new Gothamist is coming! We’ve moved comments over to our beta site. Click here to join the conversation and get a preview of our new website.