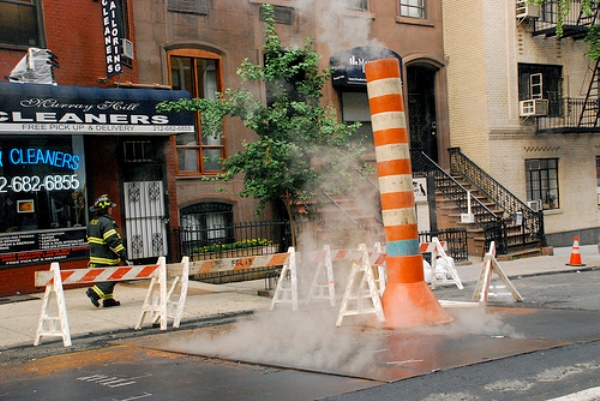 Everyone is a little more aware of the city's steam system - and those steam vents on certain streets - after last week's Midtown steam pipe explosion. The NY Times reports that Con Ed "routinely checks manholes for vapor after rainstorms and pumps out water that reaches the height of the pipes." Hmm, maybe that's why the first lawsuit against Con Ed has been filed. The Post reports a 52-year-old Bay Ridge woman, Francine Dorf, says that she thought the explosion was a terrorist attack (her sister was killed on September 11) and said that the event triggered her post-traumatic street disorder: "I can't sleep, I can't eat."

Many businesses are still worried about their lost revenues, as Con Ed won't reimburse them for lost business. Mayor Bloomberg noted that the city is offering interest-free loans of up to $10,000 but Senator Schumer said, "Con Ed needs to come through for the businesses that could have their back broken by this explosion." Assemblyman Michael Gianaris is working on legislation to require Con Ed to reimburse business for lost businesses (shades of last year's Queens blackout).

The Daily News also had this quote from Mayor Bloomberg: "I don't know how you can have [Con Ed] account for what's under the ground. They're responsible for it. What do you expect them to do? But I'm not here to defend Con Ed." Huh? We think people expect Con Ed to know what's going on!

And Lois Baumerich, the woman who died of a heart attack after the blast, was buried in NJ yesterday. She was remembered for her generous spirit. The NY Times on what her aunt Lucy Murray said: "That was a terrible thing that happened to her in the city. ” she told mourners. “I hope Con Ed gets” — here, she paused, as if trying to measure her words — “fixing those pipes.”

Photograph of a Midtown steam pipe by dietrich on Flickr