Staycations Are Here to Stay 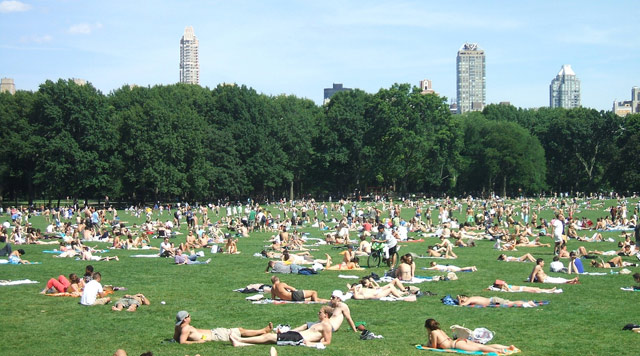 Michael Wilson over at the Times has wandered the boroughs to talk to working class types whose inability to afford gas or airplane tickets means they're stuck in town all summer. The article devotes over 1,400 words to the phenomenon, which, as you no doubt know, is called a "staycation," in the parlance of our times. Wilson's crazy about the portmanteau, in a Seinfeldian sort of way: "...it’s a very fun word to say. Staycation. How was your staycation? My parents went on staycation, and all I got was this lousy T-shirt. Our son-in-law threw his back out on staycation." (Salsa, anyone?)

What makes the article worth skimming, however, are the salt of the earth quotes. Raymond Miles, 41, a grocery manager who lives in the Bronx, began his staycation auspiciously last Friday: “Just stayed in bed. Don’t go nowhere. Then at 2 or 3 o’clock, I had lunch. Then 4 or 5 o’clock, dinner. I watched Oprah, whatever, Judge Judy, which can be pretty boring, but after a while, I thought it was interesting, because I don’t normally watch TV in the day.” His friends must be loving the post cards.

Up next, a 2,000 word article on how New Yorkers get hangry in the afternoon. Anyway, the term isn't going anywhere, and it's better than hearing about what people did on the Hamptons, so let's just make the best of it. Tell us, staycationers, what did you do on your staycation? And how will you be staycationing this Labor Day weekend?