Kakistocracy: (Ancient Greek) Government under the control of a nation's worst or least-qualified citizens.

A week later, and it still feels unreal, impossible, the most tasteless practical joke in American history. Every waking moment has been dominated by it, and every time I stir during the night my mind presses against the hastily-constructed walls of this new reality to test their structural integrity. Can it really be that this willfully ignorant sociopath will soon march triumphantly into power, surrounded by an entourage of thugs both new and hideously familiar?

The mind reels in horror. I stagger back, rub my eyes, and approach it again and again. It is real, and I can think of nothing else. How can anyone think of anything else? It’s as if an unwelcome dinner guest had, in the midst of an incoherent rant, placed a revolver on the table without commentary, just a sneer. We continue eating—there are still several more courses, and maybe he won’t make good on his threats to blow away everyone who disrespects him. Yes, let’s talk about something else. Watch a show, drink a drink, and tune out that hate-fueled rumbling as it grows in the near-distance.

But you can’t seem to fully tune it out, and would you if you could? Looking away does not make it disappear; it gathers strength in the darkness.

There’s an inclination to believe that this man has some decency hidden in there somewhere, and is not the reckless and impulsive megalomaniac he’s consistetly shown himself to be. We desperately search for some sign of reassurance, even in the face of Paul Ryan, just to continue functioning in our day-to-day lives. And then we glimpse the masters of war and deniers of climate change and unabashed bigots gathering in his inner circle, lusting for power, and this wishful thinking crumbles to ash.

This sickening feeling may be the new normal for those who love, feel empathy, and believe that catastrophic climate change and nuclear annihilation are in fact grave threats. The only other time I've felt this particular way was in the aftermath of 9/11, as the Bush administration immediately began manipulating the national tragedy for political gain, eventually launching a war that cost countless lives and $3 trillion. Perhaps the ascendance of Trump feels similar because we feel the looming cost of his recklessness already, ghouls and tragedy waiting just offstage to greet us over the years to come, a sort of 9/11 in reverse.

Writing in Salon yesterday, Chauncey DeVega also sees tangible connections between the impact of 9/11 and Trump's triumph on 11/9:

The deindustrialized Midwest and rural America have borne the brunt of America’s military casualties in the “War on Terror.” Thousands of dead and many more thousands of wounded American soldiers — not to mention those suffering from post-traumatic stress disorder and other long-term maladies — are a real and human reminder of how policy decisions affect communities around the country. These communities in turn often feel neglected, ignored and disconnected from politicians, the mainstream news media and their fellow citizens who live in blue-state America.

To win over these voters, Trump repeatedly emphasized themes of national disgrace and humiliation (“we don’t win anymore”), false claims that the United States military is “weak” and needs to be made “strong again,” and overblown anxieties about Islamic terrorism. The “War on Terror” helped Trump’s message of (white) American nationalism resonate with his public.

Even if we successfully mobilize to take one branch of government out of their clutches in two years, and vote in a mentally stable president after another two tumultuous years, does anyone really believe President Trump will voluntarily relinquish power? This goes against everything we’ve seen from him. Even when he loses, he wins—this is the narrative with which he defines himself. Of course, when the time comes, he will need a pretext, some domestic and foreign conflagrations to justify martial law, but that sort of thing is easily come by these days. And how will President Trump react to a domestic terrorist attack, however tenuously connected to ISIS? Better or worse than the Bush administration?

“You know what solves it?” Trump said of America’s alleged troubles during a 2014 interview. “When the economy crashes, when the country goes to total hell and everything is a disaster. Then you’ll have a [chuckles], you know, you’ll have riots to go back to where we used to be when we were great.” (His chief strategist concurs.)

There is a bitter irony in the possibility that this experiment called America, still so valued for the entertainments it disseminates around the world, will meet its end at the hands of a demented carnival barker. Unlike George Saunders, most of us cannot bring ourselves to face it, just as we could not bring ourselves to seriously stare into the possible reality of a Trump presidency. But we know what’s happening here. We must feel it on some elemental level. Our levels of consumption and waste have been unsustainable for so long, our whole lives, in fact, and with this we may pass the point of no return. 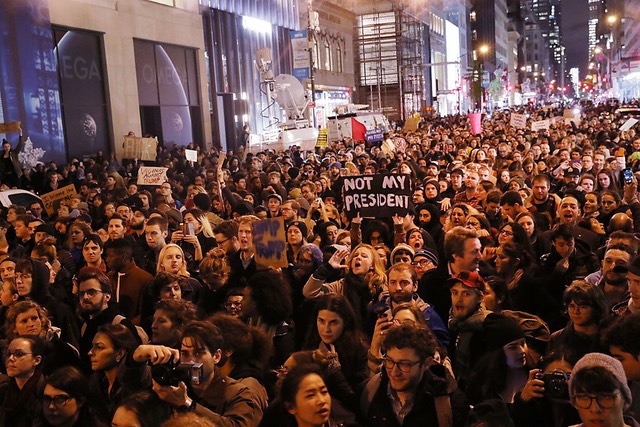 So along comes old so-and-so, a golden umber blur making an irritating noise on the periphery, for so long easily ignored and mocked, now louder and increasingly unbearable, like the roar of an unmuffled motorcycle driven by a glassy-eyed meth fiend in increasingly tighter circles around our poetry reading. He pauses, squinting, and then shrugs as he rolls away from the table where we now lay strapped with the jumper cables pinching our genitals.

Maybe we'll be spared. Maybe Trump will announce today that, given his decisive loss to Clinton by over a million votes, he will do what's right and cede the presidency to her. But the sick, nihilistic zealots on the other side of the planet are locked in a symbiotic death grip with the ignorant embittered bigots on this side of the planet, and they both hate the progressive lovers of tolerance even more than they hate each other. They want war with each other as a means of eradicating anyone in the middle. That’s us.

"They went out to collect cash debts, they broke rib cages, they got people fired, they kept an unforgiving eye on anything that might become a threat. If everything in this dream of prerevolution was in fact doomed to end and the faithless money-driven world to reassert its control over all the lives it felt entitled to touch, fondle, and molest, it would be agents like these, dutiful and silent, out doing the shitwork, who'd make it happen.

"Was it possible, that at every gathering—concert, peace rally, love-in, be-in, and freak-in, here, up north, back east, wherever—those dark crews had been busy all along, reclaiming the music, the resistance to power, the sexual desire from epic to everyday, all they could sweep up, for the ancient forces of greed and fear?" —Thomas Pynchon

How to transcend despair in these dark times? First, by standing in solidarity with those who are most vulnerable to the Trump agenda, now and always. This means actively joining the non-violent opposition, applying pressure within and outside the political system. Second, by realizing that our despair would be viewed as a victory by these evil bastards, and we should refuse to give them that. We will smile, love, make music and art, dance and laugh, sometimes only as an act of defiance. Third, by remembering you are not alone. The drumbeat of bad "breaking" news on CNN has a way of making each of us feel like isolated witnesses to a normalized madness, when we are in fact the majority. There are millions of people in America and around the world who are as outraged as you are. Seek them out and organize. We are all part of the Resistance now, even those who don't know it yet.

#donald trump
#opinions are like
#president-elect trump
#the resistance
#original
Do you know the scoop? Comment below or Send us a Tip