Statue Of Liberty Climber Patricia Okoumou: 'Walls Will Not Stop Me'

Patricia Okoumou is known around the world as the "Statue of Liberty Climber," but over the last year, she has climbed the Eiffel Tower, a Border Patrol Museum in San Antonio, Texas and a migrant detention center in Austin. For the last 17 days, Okoumou has been under house arrest in her Staten Island apartment for violating her parole during the Austin action.

"I'm still visible and I'm still an activist, even though I'm not outside," Okoumou told Gothamist. “I'm still working behind closed doors, the government cannot shut me up. The confinement of walls will not stop me, and that includes prison walls."

On Tuesday, Okoumou is scheduled to go before U.S. Magistrate Judge Gabriel Gorenstein at the Manhattan District Court House to be sentenced for the three misdemeanor charges related to her Statue of Liberty climb: trespassing, interference with agency functions, and disorderly conduct. She faces up to 18 months in jail. "We live in a rotten system and the courts are no exception of that,"; said Okoumou.

Judge Gorenstein recently took a trip to the Statue of Liberty with a full accompaniment of court clerks, Okoumou and her legal team, government officials, and park workers to assess the danger of her climb.

"I’ve never seen this in 35 years of my experience, and it was a first for everyone that I’ve spoken to," said one of Okoumou’s attorneys, Ronald L. Kuby. "Judge Gorenstein is taking the sentencing part of this case extremely seriously. That may be a good thing for Patricia, or not."

All four of her harness-free climbs were in protest of the Trump administration’s separation and caging of migrant children at the U.S. border. “I was born fearless,” Okoumou grinned.

Okoumou was born in the Republic of Congo, and was a young woman when civil war broke out in 1993. “My country was going through turmoil. We wanted to embrace democracy as a country and we wanted change.” She recalls walking to school and passing a group of soldiers carting off a dead body in a wheelbarrow. “I realized then that I was a courageous woman.”

In 1994, Okoumou moved to the United States, where she began working various jobs, including as a staffer at a battered women’s shelter, a physical therapist, and a personal trainer. She began addressing issues of injustice she saw unfolding all around her. She has waged multiple legal battles against racial discrimination, protested the New York State Department of Labor (that resulted in a misdemeanor charge), and stood for hours as a lone protester at Trump Tower in Manhattan after the 2016 presidential election.

However, it was during a Rise and Resist protest on July 4th, 2018, that Okoumou captured the world’s attention when she climbed the Statue of Liberty. “When we started putting people in cages that was the straw that broke the camel’s back,” Okoumou said. “I had had enough and I didn’t care about the repercussions. We have gone so low as a country I had to climb as high as I could on the Statue of Liberty to raise consciousness.”

Immigration authorities are still not clear on the exact number of children that have been separated from their parents and detained in cages. In December 2018, according to NPR nearly 15,000 migrant children were being held in detention centers across the country. In December, a 7-year-old Guatemalan girl, Jakelin Caal Maquin, and 8-year-old Felipe Gómez Alonzo both died in the custody of federal immigration officials. 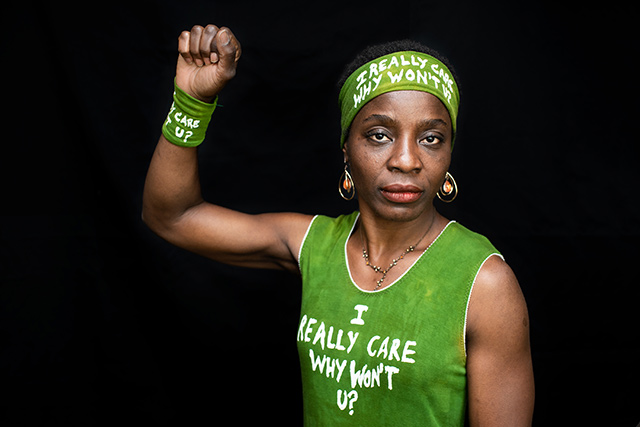 Her climbs have helped draw global attention to the humanitarian crisis, making Okoumou a hero to many. A Go Fund Me page to support Okoumou has raised $23,535 to date.

“First and foremost, Patricia, ‘Ms. Lady Liberty’, is the most prominent black voice in this immigrant rights movement right now,” said Black Lives Matter Greater New York Chairman, Hawk Newsome. “When a lot of people think of this movement they think of the brown children, but we have to remember that 4 out of the 8 countries on Donald Trump’s ‘no fly’ list were African countries. So when you think about immigrants it’s not just Latinx people and when you think about Muslims, it’s not just folks who would be considered non-black by the mainstream media.”

“Her acts served to remind us all as we ate cheeseburgers and tofu dogs at the beach and enjoyed ourselves, that there were children forcibly separated from their parents, living in detention camps, in our name,” Kuby said.

At her bail revocation hearing, Gorenstein voiced concerns about Okoumou’s Go Fund Me efforts. “In order for people to be inspired to make donations, she has to break the law,” Gorenstein said, according to Court News.

Okoumou countered that being confined to her Staten Island apartment makes job searching especially challenging so she’s published an open call for support finding work on her website.

“He implied that activism is not a real job and if I don’t find a job by Tuesday he will throw me in prison, but I want to be a full-time activist,” Okoumou said. “Why does he care about how I’m feeding myself. The people who donate to my cause believe in my work.”

If she is detained or imprisoned on Tuesday, Okoumou says she will immediately begin a hunger strike.

“Patricia has always been very clear that her protest of family separation is unceasing,” said Rhiya Trivedi, another of Okoumou’s defense attorneys. “When she says she’s going to do something, she does it, so I have no reason to doubt that that’s the case.”

“If she’s prepared to stage a hunger strike while she’s incarcerated then I personally will join in with her and encourage others to do it,” Newsome added.

“We could reach peace by simple acts of kindness, peaceful protest, and civil disobedience if we wanted to, but we are complicit,” said Okoumou. “If each one of us did a fraction of what I did the world would find peace. We have to stand up. We are the people, we have the power, let’s use it.”