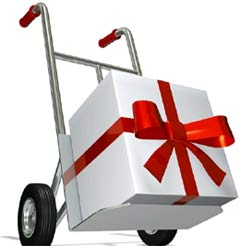 A Grinch has crossed state lines! Some NJ residents didn't receive their deliveries when a New Springville resident swiped packages from doorsteps during the holiday season.

The Staten Island Advance reports that David Oakes would follow delivery trucks "to people's doors in Ocean Township, watching to make sure no one answered the door and claimed the packages." That's the problem with package delivery without signature!

Apparently Oakes preferred "packages containing electronics, clothing and toys" - we assume he was able to discern what was contained by seeing the mailing label (Best Buy - yes; Harry & David - no) - and took about $10,000 worth of gifts. He would also cruise neighborhoods, looking for packages left on stoops.

The one-man crime spree ended when a resident called Ocean Township police to report that someone had taken a big box from a neighbor's door. When police spotted Oakes and his truck, they found a garbage bag full of other packages. Oakes is charged four counts of theft. Related: 9- and 5-year-old kids in South Brunswick, NJ stole neighbors' Christmas gifts - they broke in by jimmying the lock with a Blockbuster gift card.