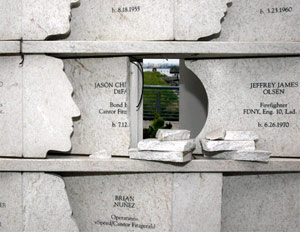 Staten Island's World Trade Center Memorial, Postcards, was defaced yesterday. The memorial has plaques of Staten Island's 1993 and 2001 attacks victims' names; the plaques also has victims' profiles water-jet-cut on them. The plaques of Cantor Fitzgerald employee Jason DeFazio and firefighter Jeremy Olsen were destroyed. Olsen's family had been planning on visiting the memorial today, because it would have been Jeremy's 37th birthday.

The memorial is located on the St. George Esplanade, near the SI Ferry Terminal and Richmond County Bank Ballpark, and was designed by Masayuki Sono. It's called Postcards because the two wing-like sculptures represent large postcards to loved ones; the sculptures look out onto the harbor at the the World Trade Center site. The memorial, which has 267 plaques and profiles on it, was unveiled on September 11, 2004, and cost $2.77 million.

You can see a description of the concept at Sono's website and photographs of the memorial at Bridge and Tunnel Club.

Photograph of damaged memorial from the Staten Island Advance; lower photographs from City of New York