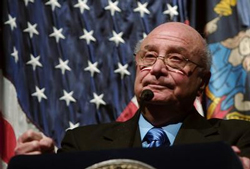 Staten Island Borough President James P. Molinaro was not happy when DA and former aide Daniel M. Donovan Jr. recused himself from the trial of Molinaro's grandson Steven for violating his probation and intimidating a paperboy he'd previously assaulted. Last week, the borough president placed a full page ad in the Staten Island Advance newspaper expressing his displeasure with Donovan punting the case to the Manhattan DA, feeling that it improperly biased the eventual jurors in the case. Steven Molinaro wound up being convicted and a will be serving several years in prison.

Now the borough president is taking out his personal ire with Donovan by publicly endorsing his Democratic opponent in the DA's race. In a letter to Conservative Party members, Molinaro endorsed his former aide's rival. “What I did not expect was for our local district attorney to step aside and allow this case to become a high-profile Paris Hilton-type case.”

Reacting to Molinaro's move against Donovan, Mayor Bloomberg backed the incumbent while expressing sympathy over Molinaro's family troubles. "[Molinaro's] lost a son, he's got a grandson that obviously is troubled, but I don't think that this district attorney did anything wrong." Bloomberg went on to credit Donovan with lowering Staten Island's crime stats, which is a major sticking point in the election. Opponent Michael Ryan has been criticizing Donovan for inflating his accomplishments by manipulating the borough's crime statistics.