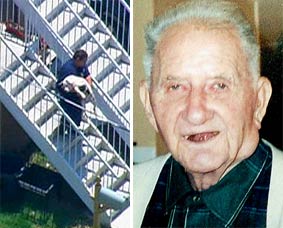 The 90-year-old man mauled by a neighbor's pit bulls yesterday morning had his left leg amputated. Henry Piotrowski's niece said he will probably lose one of his arms.

The dogs belonged to James McNair, a registered sex offender, who was charged with, per the Staten Island Advance, "having unlicensed dogs, not having his dogs on a leash and fireworks possession." Neighbors say that they have called 311 and the police repeatedly about the pit bulls, which were tranquilized and later euthanized yesterday afternoon. The Daily News reports police say by the time they would arrive, the dogs would be gone, and "said loose dogs were an ASPCA matter."

Neighbor Reginald Bell who helped chase the dogs from Piotrowski's lawn was in shock over the attack, "It was horrible. I could not believe these dogs were eating this man like lions on a gazelle. This is not Zimbabwe. They were eating this man alive...There was nothing but bone, blood and cartilage." Piotrowski's niece Elaine Sutton said she "couldn't even distinguish" her WWII veteran uncle's face but remained hopeful, noting he "is a tough guy, so if anyone is going to survive something like this it's gonna be Uncle Hank."