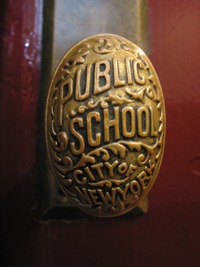 Reuters has a sad story today about a young Staten Island man named Osama Al-Najjar. He now goes by "Sammy," but insists that family members still call him Osama in private. His given name was relatively innocuous until 2001, when it became shorthand for the infamous terrorist Osama bin Laden. After being taunted as "bin Laden" and "terrorist" at his high school, Al-Najjar attempted suicide twice in one day via pills and hanging. Upon entering high school, the junior high honors student started encountering the abuse, and was soon failing classes and getting into fights. His family eventually withdrew Osama after complaints about the racist abuse being heaped on their son at Tottenville High School were not dealt with by the school. And surprisingly, the abuse was not at the hands of his peers; the hateful taunts were emanating from Al-Najjar's teachers, who were his primary tormentors. He now attends a special school for children with "school phobias" in Brooklyn.

We think this is terrible, especially considering that Osama's oldest brother served in the Navy during the war in Iraq. But we also have a few concerns about the Reuters piece itself, which states that Al-Najjar's immature early-teen classmates were fairly benevolent in view of his coincidental name with a terrorist leader, and that it was his teachers who were dishing out the cruel treatment. This rings oddly to us, if our remembrances of high school serve as any guide. Also, the piece ties in a long discursion regarding the Khalil Gibran Academy and the opposition it has faced, as well as Islamophobia faced by Muslims in recent years, including children. And the Al-Najjar family is suing NYC.

We feel that our previous posts regarding the Khalil Gibran Academy have been generally positive regarding the proposed bi-lingual school. The Reuters piece, however, sounds like a badly contrived press release in its favor, rather than a news story. We wish Osama Al-Najjar a taunting-free future and continue to think that the Kahlil Gibran Academy's attempt at bi-lingual education is a great idea. Reuters, on the other hand, we may have to take with a large grain of salt going forward.