Though August was surprisingly mild (for August), September has been a hot and sticky mess so far. So many students at public schools have opted to wear shorts and tank tops to keep cool. But at Tottenville High School on Staten Island, on the second day of school, students are being slut-shamed into covering up.

According to the Staten Island Advance, at least "at least 100 students— most of them girls— [were told] to either cover up, or wait in the hot school auditorium until a parent arrived with appropriate attire. The dress code prohibits 'tank tops, low-cut blouses, tubes/halter and midriff tops' as well as 'short-shorts' and 'mini-skirts,' and mandates that "all shorts/skirts must be at relaxed hand-level' and also prohibits 'visible undergarments.'"

Apparently school administration and teachers spent Friday stopping students who appeared to be violating the dress code. One student, sophomore Olivia Buonomo, told the Advance she had to wear a "heavy grey T-shirt" instead of her much lighter tank top. Another student pointed out the school was also uncomfortable without air-conditioning, "The whole building is sweltering today." 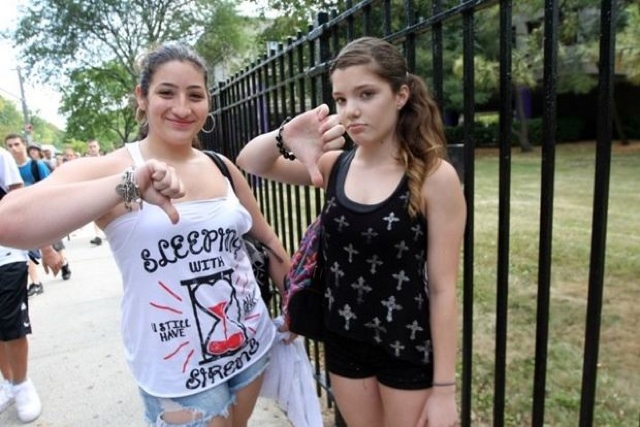 Olivia Buonomo was forced to wear a Tottenville High School t-shirt, while Tiffini Cropley hid her outfit behind her book bag (Photograph courtesy of the Staten Island Advance/Jan Somma-Hammel)

Naturally, parents are outraged as well:

Vincent Candellieri of Annadale, said he had to pick up his three daughters, Joanna, a senior; Christina, a junior, and Laura, a freshman, who are honor students -- after they were detained for wearing shorts.

"I can understand where they're coming from, but this is outrageous," he said, adding he is considering filing a class action lawsuit.

Linda Ferraro said her daughter, a sophomore, escaped punishment because she hid behind a friend. "If I wanted a dress code, I'd send her to a Catholic school, or let the school buy her a whole new wardrobe," she fumed.

How were boys caught up in this? Well, other items in the dress code are "hooded sweatshirts and sweatpants, leggings and 'skinny jeans' as well as headbands, hats, bandanas and sunglasses." Here's what the Tottenville High School website says about a dress code (the Advance says a six page contract about the code was sent to students families and required a parent's signature): 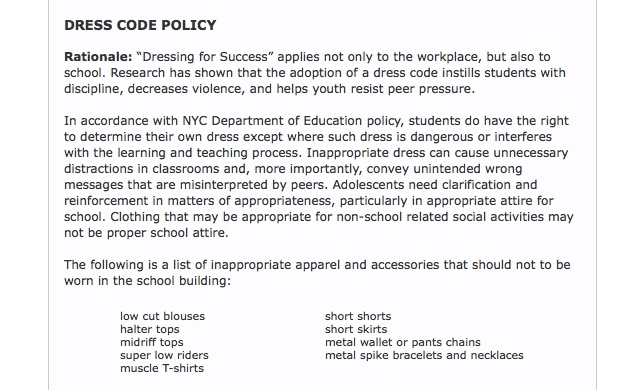 A couple of years ago, at Stuyvesant High School in Manhattan, one female student said she was wearing a modest dress only to be harassed by staff:

I walked in wearing a dress that did in fact follow the rules, only to be stopped by one of the women sitting by the scanners. She told me that my dress was too short, and that I would have plenty of time to “show off my curves” when I wasn’t in school (I found this to be ridiculous because the dress I was wearing was shapeless). She then went on to say that the dress code was only instituted for my protection, because there are a lot of bad men outside school, and if I was raped nobody would be able to take that away from me. Then, she said, “and you want a husband, don’t you?