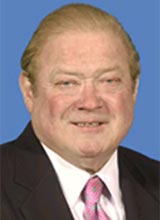 Frank Powers, a retired Wall Street executive and MTA board member who had been recently chosen to run for Representative Vito Fossella's congressional seat this fall, died yesterday. The 67-year-old apparently died in his sleep, found by his wife Diane, in his Todt Hill home.

Just last month, Powers was endorsed by the Staten Island Republican Party to run for Congress this fall. Powers, a retired millionaire who donated to many charities, had reportedly promised to spend $500,000 of his own money plus raise that much for his campaign. The race for the 13th Congressional seat, vacated by Fossella after his DWI and lovechild scandals, has been watched closely because it's NYC's only Republican Congressional seat, one of six GOP seats in NY State, and one of many that are now in play for the Democrats.

Fosella told the Advance he was "totally shocked" about Powers' death, "Frank Powers was a true American success story. He lived the American Dream. He was genuine and he had integrity. He was an honest man. He had a heart as big as the shamrock on the front of his house. He epitomized what America is in terms of potential, and yet he never forgot where he came from."

Now the Republicans must re-evaluate who is best-positioned to run against Democrat City Councilman Michael McMahon. McMahon aid, "Frank Powers was an asset to his community. He did a lot of charity work. He was someone we consider a friend... What it means for the race for Congress in Staten Island and Brooklyn is something we aren't even thinking about today." And one twist in Powers' candidacy was that his son from his first marriage, Fran Powers, was briefly a possible rival during the fall's election. The younger Powers ran for the Libertarian party's nomination, but lost to Susan Overeem.