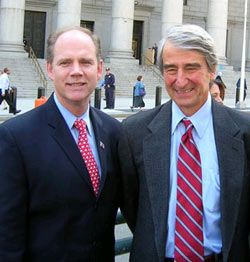 Brushing aside the Staten Island Borough President's repeated criticism and endorsement of his opponent, Staten Island District Attorney Daniel Donovan won re-election in a landslide over Democratic challenger Michael Ryan. Donovan, whose 51st birthday was also yesterday, said during the celebration, "Tonight, you guys made me real happy."

The SI DA's race became unexpectedly contentious when SI Borough President James Molinaro, who Donovan worked under as a Deputy Beep and considered a friend, attacked Donovan's decision to recuse himself in a case involving Molinaro's grandson. (Molinaro still feels that the special prosecutor from Manhattan used tactics that landed his teenage grandson with a harsh sentence.) Molinaro's public outrage allowed Donovan to tout his integrity. The second term DA told the Advance, "Dozens of people have told me as I've been campaigning that what occurred over the last few weeks was the reason they were coming out."

The election was also notable for having the lowest voter turnout in a borough general election. It may have even been the lowest voter turnout in the history of NYC general elections. And Election Day was not without some tragedy: A 63-year-old poll worker on her way to her job was killed by a speeding driver who ran a red light in Brooklyn. The driver was charged with criminally negligent homicide.