The couple raising eyebrows on Staten Island (and going viral on social media) because the boyfriend is leading the girlfriend on a leash is talking to the media. Nathan Riely told the Staten Island Advance, "We honestly didn't expect to blow up. We don't do this for attention. This is just our lifestyle." And "Xena" said to the Daily News, "This is the lifestyle I chose to do."

Riely and his girlfriend, who calls herself Xena, were asked to leave the Staten Island Mall earlier this month when they were spotted. He said, "In her mind, she relates more to dogs than humans," while Xena confirmed, "I'm a puppy and I'm his pet. My loyalty to him will never die." From the Advance:

On occasion, she nudges a reporter's leg with her head. Riely shoots her a discerning glance and calls her back to him...

In the "puppy play" lifestyle, one person takes the role of handler, and the other is cast as the canine. While not always sexual, it can be.

For several months, Riely and Xena would talk all day long, entering into a "master and pet" relationship -- but as the relationship advanced, they also fell in love.

They claim that participants of the "puppy play" lifestyle tend to be rather private because it is frowned upon within society, yet, despite the negative attention, they have received a number of compliments and "thumbs up" while out in public -- especially from dog walkers and mainly on her different collars.

Riely understands that there will be confusion, "No matter what, everyone is right and no one is wrong. Everyone can have their own thoughts and opinions on the matter. If they stop and ask us we will explain." 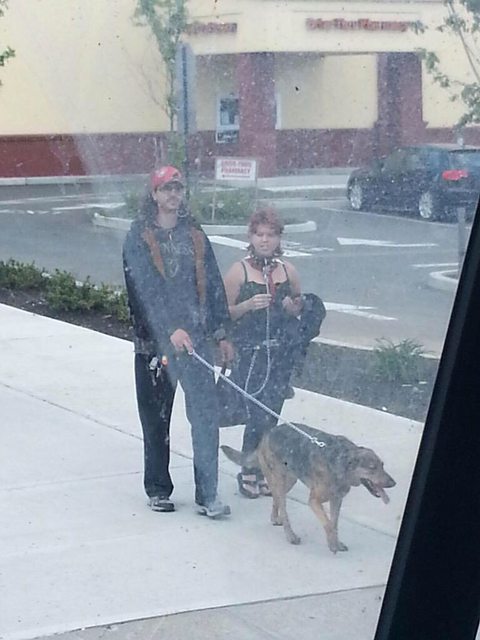 The couple, who are currently living in a motel (Riely, a commercial trucker and ex-Marine, says they are looking for a place), are planning on getting married in October 2016. Xena, who insisted there's no abuse in the relationship, said, "The first time I put on a collar I thought 'Now I need to find someone for the other end.' As long as I'm with my 'fiancée master' I could not be any happier."

#leash
#puppy play
#staten island
Do you know the scoop? Comment below or Send us a Tip