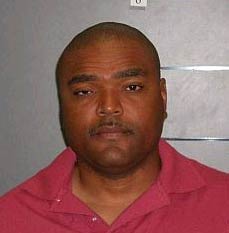 A former FedEx worker turned state trooper is accused of writing phony speeding tickets to get back at a man he had an argument with over a parking spot. The ticketing revenge allegedly began after office Lester Hooper (pictured), an East Flatbush resident who patrols Westchester, and his wife became outraged at a neighbor, Derrick Perry, for not moving his truck back in January.

Perry, a house painter, tells the Journal News: "I didn't move my truck one time. He just came out like some sort of big shot." Hooper was off-duty during the incident, and is said to have flashed his badge and taken down Perry’s license plate number. A flurry of five tickets ensued over the next months, which Hooper allegedly made up without ever stopping Perry. After an investigation, Hooper was formally charged yesterday with three felonies and three misdemeanors, and is suspended without pay.

His lawyer insists Hooper was motivated by some “pretty offensive” contact Perry had with the trooper's wife, and that his vendetta was an "emotional thing in defense of a family member.” To that, Perry says, “I don't even know his wife. He's just trying to cover up because he messed up. And I'm going to sue his ass. It's not over yet.”

#arrested
#charged
#Derrick Perry
#Lester Hooper
#new york
#speeding
#state trooper
#tickets
#traffic
Do you know the scoop? Comment below or Send us a Tip
A new Gothamist is coming! We’ve moved comments over to our beta site. Click here to join the conversation and get a preview of our new website.