State Senator To Cyclists: "Find A F*cking Bike Lane And Get In It"

Operating heavy machinery at high speeds can be stressful, especially with obstacles like bicycles impeding your right to get the most out of your Corvette's lease agreement. State Senator Diane Savino can empathize (her district covers a swath of Staten Island, as well as Bath Beach, Gravesend, and Coney Island in Brooklyn) and today she offered her remedy for clearing the two-wheeled insects from her windshield: "Hey, find a f*cking bike lane and get in it."

Savino's comments were added in response to a a Facebook posting concerning the death of Jean Tarlov in Central Park that begins, "And here comes the bullshit apologies from the bike community" and ends "Arrogant assholes, one and all. Ban 'em all." 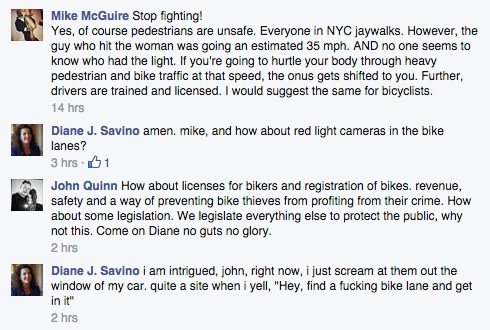 According to city law, cyclists may leave the bike lane when making a turn, or when it is "reasonably necessary to avoid conditions...that make it unsafe to continue within such bicycle path or lane," such as law enforcement responding to a call for Better Ingredients, Better Pizza, or state senators bearing down on you and screaming obscenities out the window.

Senator Savino's chief of staff, Robert Cataldo, told us the senator would not be commenting on the posts. But she gave a comment to the Daily News, and insisted that she was only joking.

“Unfortunately, those who don’t follow the rules of the road create problems as we saw with that terrible tragedy in Central Park,” Savino said.

“Minimally, there’s got to be greater enforcement,” she continued. “And bikers have to take responsibility for what’s happening. They’re moving sometimes at 40 miles an hour. We just went through the whole process of reducing the city speed limit to 25 miles an hour, unless it is otherwise posted. That should apply to bikes as well. We are all in this together.”

Earlier this year, the senator voted to allow New York City to lower the citywide speed limit from 30 mph to 25 mph.

Savino's boyfriend is State Senator Jeff Klein (according her Facebook background—I mean, come on *snaps gum*), the Republicrat who nearly ran over a cyclist in 2008.

Klein did not take kindly to the cyclist alerting him of his presence. An open letter from the cyclist to Klein has more details:

At this point, you brought your vehicle to an abrupt halt, not to avoid hitting me, but because you apparently needed to communicate something to me. You rolled down your window and said, "Get your hands off my car, you fucking asshole."

I said, "You were veering into me and going to crush me."

This gave me the impression that you were threatening me.

A couple that curses at cyclists from moving vehicles together, stays together.

#bike lanes
#diane savino
#pedestrian safety
#staten island
#vision zero
Do you know the scoop? Comment below or Send us a Tip