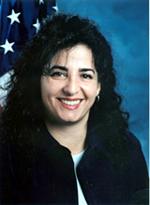 The custody battle over Michelle Malakov, a 4-year-old who witnessed her father being shot to death at a Queens playground, continued in Queens Family Court. And the testimony of State Senator Diane Savino underlined how the dispute between the slain man's family and his ex-wife has gone almost full-tilt crazy.

Queens dentist Daniel Malakov had been awarded temporary custody of his daughter for about a week. On October 28, he was dropping her off to see her mother, Dr. Mazultov (Marina) Borukhova, at a Queens playground when a gunman shot him three times in the chest. Investigators haven't named a suspect, but have investigated whether Borukhova's family may be involved in the shooting because the couple had an acrimonious history over the child's history.

State Senator Savino (pictured) said that on October 18, she met with Borukhova and two of her sisters. Savino said that one of the sisters asked, "What if something happens? What if [Malakov] can't take care of her?" to which Savino said Borukhova would probably receive custody. Then she was asked, "What if she [Michelle] disappears?" and Savino said, "‘If you’re asking me what I think you’re asking, I cannot advise you more strongly against this action. They will find her. They will extradite her here. She will go to jail. Your niece will end up in foster care. You will also go to jail." Savino said that when she read reports of Malakov's death, she went to authorities.

Borukhova took the stand and claimed that Malakov had abused her and their child, but a court-appointed psychologist Dr. Paul Hymowitz who examined Michelle said that Borukhova is "manipulative", noting her "callous disregard not for the rights of the co-parent but to the well-being of the child."

A legal advocate for Michelle, who is currently in the care of a foster family, agrees with the Administration for Children Services' position not to return Michelle to her mother. The Post's Andrea Peyser has a column begging for someone to help Michelle, noting that her mother and her paternal grandparents seem more interesting in fighting than actually raising her.