State Senate Leadership Up in the Air Once Again 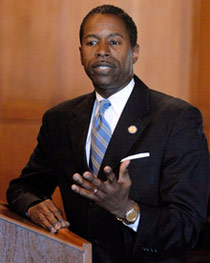 So that deal to share power between State Senate minority leader Malcolm Smith and the "Gang of Three" Senators is dead. Smith said this morning, "When we first started out, the discussion was about reform and changing the government," but now negotiations were suspended "effective immediately." City Room reports that someone asked Smith, "You really thought this was about reform?" Ha!

The State Senate Democrats have been debating on who will lead ever since the Democrats gained control of the Senate in early November. Dissident Senators, the "Gang of Four"—which lost a member to become the "Gang of Three"—banded together, partly because they feel Latinos have been underrepresented in the government's ranks. Last week's power sharing deal was announced, with Smith as Senate president pro tempore and State Senator-elect Pedro Espada as majority leader—amid reports that the Smith agreed to take gay marriage discussions off the table to please the Gang of Three.

Now, Smith is being accused of trying to "slice-and-dice" the majority leader position," but the Queens politician apparently doesn't care if the three Senators head to the Republicans (the Dems currently have a 32-30 majority)! He said, "We would rather wait two more years to take charge of the Senate than to simply serve the interest of the few." Espada said, "Throughout this process, Malcolm Smith has proved to be the not-ready-for-prime-time leader. I will not sit in the room with him again unless he's got the total support of his own conference."