It's been over a decade since former mayor Michael Bloomberg promised 28-acre Bushwick Inlet Park as part of a major Williamsburg waterfront rezoning initiative, grossly underestimating the cost of the relevant parcels of future parkland. Now, in an effort to make the city follow through, state senators have drafted a bill that would empower Empire State Development, Governor Cuomo's main economic development agency, to grab the remaining parkland through eminent domain—the right of a government to seize private property for public development.

"The city made the clear promise more than a decade ago that is hasn't kept," said Senator Daniel Squadron in a statement to the Daily News, which first reported the story. "We’re asking the state to help ensure the city keeps the promise it made to the community for open space that the community desperately needs."

Under the proposed legislation, Empire State Development would be empowered (though not required) to seize the final parcel of land needed to complete Bushwick Inlet Park—the site of the former CitiStorage warehouse, which was gutted in a massive fire in February 2015. Empire State would then transfer the parcel of land over to the city to be developed into parkland. To speed things along, the city would be slapped with a $1 million fine for every subsequent year sans-park (that money would be set aside in a special trust for city park development).

It's a possible solution that's long appealed to the advocacy group Friends of Bushwick Inlet Park, as well as CitiStorage owner Norm Brodsky. For the latter, eminent domain could mean a market-value sale. He told the News this week that he was "thrilled" with the legislation.

Back in the mid-aughts, Bloomberg estimated that it would cost between $60 and $90 million to acquire all of the Bushwick Inlet acreage. As of last June, the city had already spent $225 million buying up just nine acres of the proposed 28. An additional $53 million was spent in March for another seven-acre parcel—currently home to the Bayside Fuel Oil Depot—along the southern edge of Bushwick Inlet. Brodsky has reportedly asked for as much as $500 million for his charred site, but more recently made a $325 million valuation. 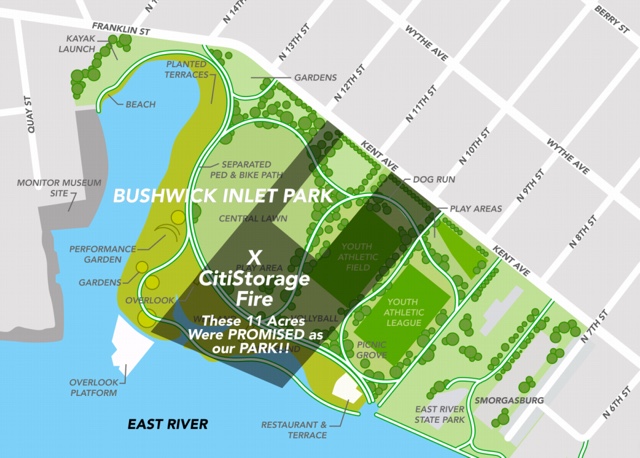 Friends of Bushwick Inlet Park co-chair Steve Chesler told us on Thursday that he was "cautiously excited" about the new legislation, acknowledging that it will have to pass through the Senate and Assembly (and over Cuomo's desk) before Empire State Development can even consider taking action. "The city made the promise, so they should be the ones following through," he added. "But we appreciate that our state reps are taking it into their own hands."

Empire State Development did not immediately respond to a request for comment on their level of interest in acquiring CitiStorage, if the legislation were to pass.

A spokeswoman for the Mayor's office told us that the city would "review the legislation," stressing that an additional $22 million has already been set aside for the demolition and remediation of the Bayside site, and that remediation at nearby 50 Kent Street, the old Brooklyn Flea site, is already underway.