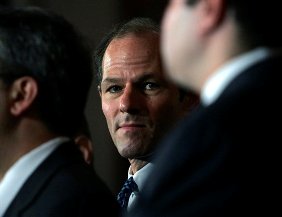 State Ethics Commission, long time no see! It's been about eight months since you found State Comptroller Alan Hevesi had violated state law, and now you're back on the radar with an investigation into Governor Spitzer's administration's conduct regarding use of the state police to track State Senate Majority Joseph Bruno.

The SEC has the power to subpoena people to answer questions, a power the Attorney General's office does not have - which means that Spitzer's suspended communications director Darren Dopp and chief of staff Richard Baum might have to spill the beans instead of offering sworn statements. The State Senate, led by the Republicans, wants to start its own inquiry as well, and the Sun suggests that an SEC investigation could help Spitzer avoid cooperating with a Senate investigation. Fun fact: The SEC is headed by a Spitzer appointee.

During a bill-signing press conference, reporters pummeled Spitzer - who pointedly said he wouldn't answer questions about the scandal - with questions. The Politicker has videos of the NY Post's Fred Dicker demanding answers as well as the NY Times' Danny Hakim questioning Spitzer. Here's Dicker's story about tough questions. Hey, note to Albany elected officials and their staffs: If you stop doing stupid stuff, stalling bills for sake of politics, and the other nonsense that has made the NY State Legislature the most dysfunctional in the country, we can take the state government a lot more seriously.

More fun facts: Some Wall Street types are enjoying Spitzer's mess, the Post points out that Spitzer's used state aircraft to mix state and personal political business and the Daily News has an editorial saying Spitzer's minions must talk.