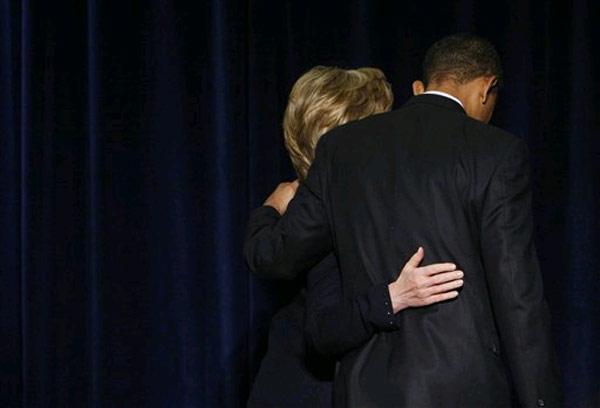 With Hillary Clinton getting ready to move into the executive branch as Secretary of State under President-elect Barack Obama, her future staffers are looking forward to meeting her. The NY Post reports they were "hovered around TV sets at the State Department yesterday to get a glimpse of [the] new boss... and most of them - even Republicans - said they were thrilled about the chance to work for such a high-profile figure." One staffer said, "We've all been excited since last week...The State Department is very positive about Hillary." And a Republican staffer offered, "I don't think she's inexperienced... I never imagined Hillary Clinton as taking the wingman role in foreign policy." Dude, wingwoman role!

Practically speaking, Newsday wonders if the Clintons will leave New York and asked P. Gilbert Mercurio, the head of Westchester County's Board of Realtors (the Clintons have a home in Chappaqua), what he thought. He said, "I have no idea what their circumstances are on their property, or their finances. To be a little serious, the answer to your question of whether it's a good time to sell would depend in large measure on the size of the mortgage outstanding. The more that they've paid it down, probably the better it is to relocate just from that aspect alone." Good to know! Also good to know that Bill Clinton received a $1.2 million donation from the World Toilet Organization.

A few other notes: Hillary Clinton will remain in the Senate until she's confirmed. A Georgetown professor tells ABC News, "When world leaders meet with a secretary of state, they want to believe they're dealing with a heavy -- a person of substance who matters politically. She's got that." And the Times' Alessandra Stanley thinks Clinton's appearance yesterday was her actual concession speech.