State Budget Not on the Mend After 'Exercise in Mockery' 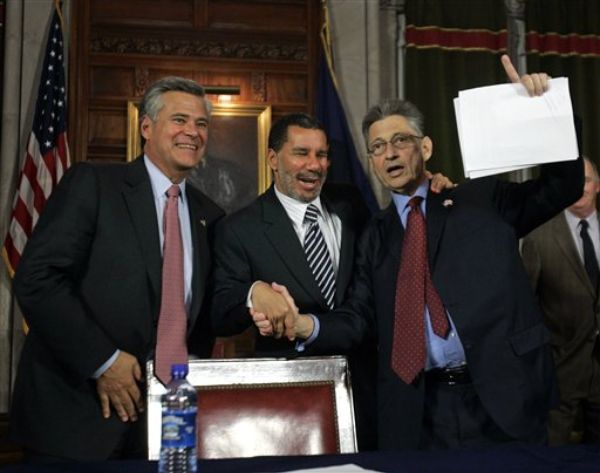 The special legislative session called upon by Governor Paterson yesterday fell on its face with no action being taken to address the already sizable and quickly growing state budget deficit. The ninety-minute session open to the public amounted to what some called nothing more than "political theater" and even "an exercise in mockery."

Paterson and current Senate Majority Leader Dean Skelos were expected to butt heads going into the meeting, but no one anticipated the degree in which they did. At one point, the governor said that he could sum up the budget cuts suggested by Skelos and held up a blank piece of paper. That then led to a paper-off of sorts where Assembly Minority Leader James Tedisco shot back with the same gesture summing up the cuts put forth by Assembly Leader Sheldon Silver.

The News points the finger at the legislative leaders involved calling them "gutless wonders" and that "brainless jellyfish would not have done worse." The Post lays more blame on the governor for not having reached out more to Skelos and other leaders prior to Tuesday's meeting. They say that he flunked his major leadership test by doing nothing to convince legislators to back his cuts while instead "he found time for trips to sunny Puerto Rico and St. Maarten, and visits to Washington, DC."

Paterson, along with Silver and the man hoping to take over as senate leader Malcolm Smith, are back in Washington today trying to vie for a federal economic stimulus package for New York. The governor plans to offer the budget for next year on December 16, a month ahead of the usual time. Skelos can claim a minor victory that the big budget cuts did not come under his reign as Senate Leader, but yesterday's debacle is not likely to help his standing politically when Democrats control all three branches of the state in January.