Police are investigating a series of firebombings in Queens late last night as possible bias crimes. Between 8 p.m. and 10:15, four locations within two miles of each other in Jamaica, Queens were hit by Molotov cocktails. One of the locations was a private residence on 107th Avenue that caught fire after the burning bottles struck it, and it took more than 60 firefighters to bring it under control, the Times reports. Another target was an Islamic center on the Van Wyck Expressway. 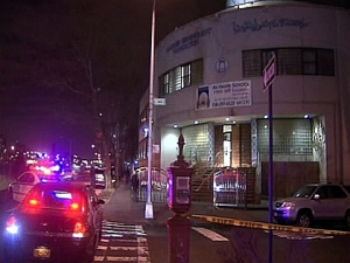 Approximately 80 people were inside the Imam Al-Khoei Foundation, which contains one of the most prominent Shiite mosques in New York, when several Molotov cocktails were thrown at the building's facade around 9 p.m, causing minor damage. Ali Rizdi, who attends the mosque, tells the Daily News he stomped out the fire, which was sparked by a flammable liquid in a glass Starbucks Frappuccino bottle. "We are shocked," says Rizdi. "We live in the U.S. This is our country."

A bodega at 179-40 Hillside Avenue was the first to be attacked, around 8 p.m. when someone threw a Molotov cocktail at the counter. The fire was quickly extinguished and there were no injuries reported. The last target, a private house used for Hindu services, was hit just before 10:15 p.m. Police tell the AP two bottles were thrown but didn't explode, and the house's owner told police he saw the drive-by attack on his security camera.

The Council on American-Islam Relations has condemned the attack on the Islamic center, and Governor Cuomo issued this statement this morning: "The four reported attacks on Sunday night go against everything we stand for as New Yorkers and Americans. Attacks such as this have no place in our open and inclusive society and we must do all we can to ensure New York remains a safe and tolerant place for all. I am thankful that there were no reported injuries. To make sure those who perpetrated these attacks are brought to justice and we prevent future bias crimes, I have asked Superintendent of State Police Joe D'Amico and Deputy Secretary for Public Safety Liz Glazer to provide any assistance that is needed on the investigation."

#bias crimes
#hate crimes
#jamaica queens
#molotov cocktail
#muslims
#queens
Do you know the scoop? Comment below or Send us a Tip