Star, the pit bull mix shot by police in broad daylight nearly three weeks ago, is being released into the NYC Mayor's Alliance shelter system today. "She had surgery earlier this week to remove her left eye, which had not improved in recent days," Richard Gentles, a spokesman for the Animal Care & Control said in an email. "She suffered a significant degree of hearing loss, but her hearing is coming back and the vision in her right eye also seems to be improving." Gentles adds that Star is "able to walk, play with toys, and eat on her own."

Metallic fragments were lodged around Star's left eye, which necessitated its removal, Gentles said. Additionally, she suffered "soft tissue, bone, head trauma, and eye damage as a result of her wounds." 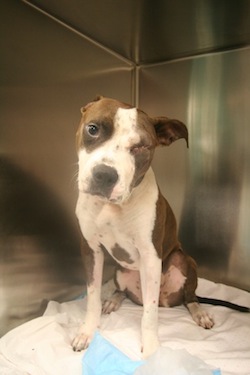 Star's owner, identified by the Local East Village as Lech Stankiewicz, never returned to pick her up. Star and Stankiewicz were known to sit near the KFC on 14th Street at 3rd Avenue, which is where Star was shot by police after she nipped at a woman and began running towards an officer (you can see graphic video of that shooting here).

Last week the Daily News reported that Star had attacked a woman several months ago, an incident that required her to receive stitches.

We've asked Steve Gruber, the director of communications for the Mayor's Alliance for NYC's Animals, if Star has been or will be evaluated for aggressive behavior that may affect her potential adoption. We'll update when we receive an answer.