An LIRR train bound for Penn Station got stuck for hours at the entrance to the East River tunnels this morning, causing widespread rush hour stress migraines. The train, which was coming from Port Washington, stalled around 5:40 a.m., according to a railroad official. The railroad blamed the situation on "a third rail problem outside Amtrak's East River Tunnels."

Roughly 500 passengers sat in the stalled train until 7:40 a.m., when they were evacuated onto a relief train, which delivered them to glorious Hunterspoint Avenue in Queens. An MTA spokesperson said the train had been cleared from the tracks by 9 a.m., but the ripple effect caused delays into Penn averaging 20-25 minutes. 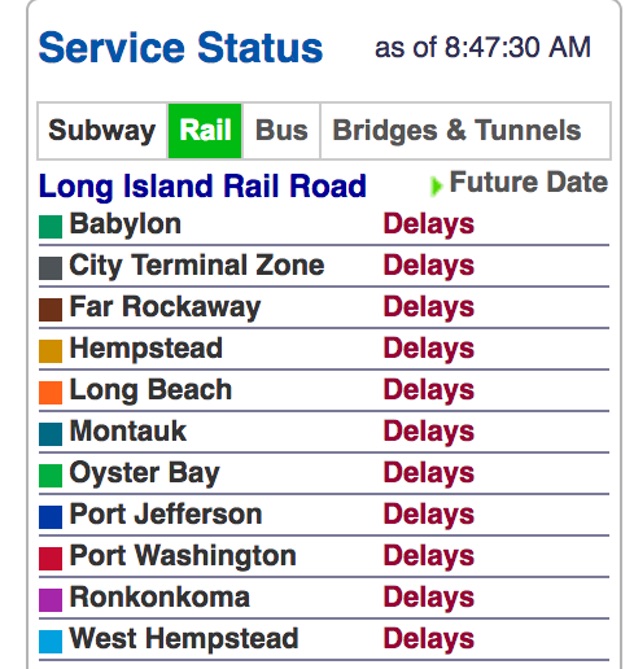 By 8:30 a.m., 17 trains had been cancelled or rerouted to Atlantic Terminal or Hunterspoint Avenue. An MTA spokesperson explained that the delays were the result of reduced track capacity, because only three out of four East River tunnels were operational due to the stalled train.

It all boiled down for a rush hour shitshow for people trying to get to work from Long Island. Many turned to Twitter to voice their frustration; one commuter described the overcrowding at Jamaica station as "dangerous insanity."

@LIRR no room to board on the train that just arrived at Kew Gardens. Is the 8:47 still coming? pic.twitter.com/SfiJYSeea4

Today's mess comes as LIRR commuters are already bracing for the impact of the so-called "Summer of Hell," when track repair work at Penn Station is expected to cause more such commuting headaches, as several tracks at the hub are taken out of commission. It begins next week on July 10th.

These train delays got me in the mood to cyber bully the person who runs the MTA LIRR Facebook page pic.twitter.com/FTs3fDuzN0

#lirr
#MTA
#summer of hell
Do you know the scoop? Comment below or Send us a Tip