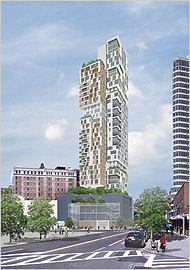 After months and months of delays, the BAM Cultural District may be moving forward. The NY Times is reporting that city officials have chosen Harlem-based developer and Brooklyn resident Carlton Brown to create what the Times' Terry Pristin calls the "cultural district's centerpiece." This is the first Brooklyn project for Brown, who developed the Kalahari and 1400 on Fifth in Harlem and the Solaire, the city's first residential green building, in Battery Park City.

The building, which will be designed by Studio MDA and Behnisch Architects, will have 187 units of mixed-income housing (which accounts for half of the tower's residential units), 4,000 square feet of retail space and a 40,000 square foot dance center anchored by the Danspace Project. There will be five cantilevered blocks of apartments, ranging in height from 6 to 14 floors. Studio MDA architects Markus Dochantischi and David Salazar started their own firm after working for Zaha Hadid.

The move was partly an effort to quell critics who claimed that locals were being overlooked - and even displaced. Take Todd Triplett, who, with his partners, put $1.2 million into an old liquor store to create a performance venue, recording studio and art nonprofit at Fulton St. and Ashland Pl. only to receive a letter from the city that the property was being taken via eminent domain. And that was just weeks before they were supposed to open.

Brown, who is African American, has ties to an arts non-profit in Brooklyn and was involved in a coalition of community groups that objected to the evolving district's Manhattan feel. He said, "The community saw themselves as a creative place with a lot of artists. We just didn’t have the resources that we needed. Harvey [Lichtenstein, Director of the BAM Local Development Corporation] thought you needed to bring in people from Manhattan — that there were not enough people to support visionary, cutting-edge arts.”

Both the Frank Gehry-designed Theater for a New Audience and the Visual and Performing Arts Library by Enrique Norten also have experienced delays. Lichtenstein said that the arts district was slowed because of a lack of funding, which has changed given the city's emphasis of developing downtown Brooklyn. The Times reports that the city has earmarked $100 million through 2011 to the BAM Cultural District alone. Construction on the project is scheduled to begin in early 2009.