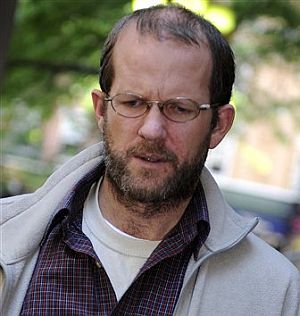 Jack Jordan, the man convicted of stalking actress Uma Thurman, received a sentence of three years probation today. On May 6th a jury found Jordan guilty of stalking and aggravated harassment. Prosecutors had wanted him to spend a year in jail, but the judge declined to order any jail time, opting for psychiatric counseling for the 37-year-old former mental patient.

Jordan had repeatedly tried to meet Thurman, who seemed to be the one “courting” him, according to his testimony: “We were engaged in a game of cat and mouse.” The rules of that game involved Jordan frequently sleeping in a car outside her Manhattan apartment, ringing the doorbell at odd hours, and sending affectionate little notes – like the one with a stick figure drawing of Thurman next to a grave with a stick figure of Jordan on an "ACME" razor. Only a real ice queen like Thurman could resist that.

Jordan will serve the probation in his home state of Maryland. According to the Times, before the sentencing, Jordan told the judge, “I’m terrified of being incarcerated again… “My greatest wish is that I had known sooner that I was putting fear into the heart [of Thurman].” He also apologized in court today to Thurman, but since she wasn't present, he'll just have to send a card.

#criminal court
#Jack Jordan
#probation
#sentenced
#stalker
#trial
#uma thurman
Do you know the scoop? Comment below or Send us a Tip