Stabbing of Restaurant Greeter May Be Mob Related 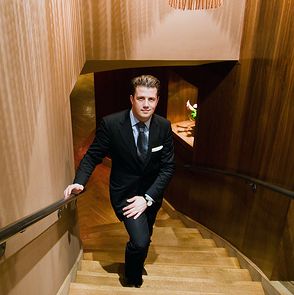 The morning after George Atterbury, general manager of Grayz restaurant on West 54th Street, was interviewed by Eater about his experiences greeting swells at Grayz, he was slashed in the face and stabbed in the abdomen by three men on the East Side. A dining blog curse, or just a random act of violence? Police are now suggesting another possible explanation: mob ties.

This isn’t the first time the dapper Atterbury’s been victimized by thugs; while working as an assistant manager at a Philadelphia restaurant in 2003, he was shot in the abdomen during closing. Yesterday’s attack occurred around 7:30 a.m., when Atterbury was trying to hail a cab on East 40th Street near Second Avenue.

Police say three men jumped out of a black SUV, stabbed him in the abdomen and slashed his face. Atterbury then staggered into a nearby Hertz office, where he waited for paramedics; he was rushed to Bellevue and released last night. Atterbury claims he did now know his assailants.

The Post’s NYPD sources say Atterbury is not cooperating with the investigation because of alleged ties to mobsters in Philadelphia. They also say his father, George Sr., was a mob associate. If true, it would seem to contradict what he told Eater this week, that the key to a job like his is to “surround yourself with great people.”