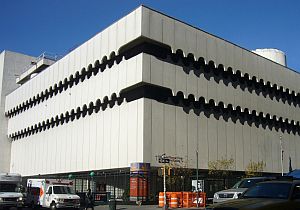 In presenting their argument for a massive demolition and construction project in the West Village – one that would raze the distinctive O’Toole Building (pictured) – representatives of St. Vincent’s hospital told the Landmarks and Preservation Commission yesterday that it will have to shut down if their proposal is not approved. Last month the commission unanimously rejected the hospital’s $1.6 billion development plan, which would demolish nine buildings to make room for a 329-foot-tall medical building on the O’Toole site and a 265-foot-tall luxury condominium in partnership with the Rudin Management Company.

According to the Times, lawyers for the hospital insist that “there is no other solution to this problem than to build on the O’Toole site. We can’t proceed if O’Toole remains.” St. Vincent’s executives are hoping to capitalize on a landmark-law exemption that lets non-profit institutions claim “hardship” in order to demolish old buildings. Yesterday they brought out a health care consultant to testify that St. Vincent’s is “obsolete” in its current state, and a structural engineer argued that retrofitting the O’Toole Building into a modern facility would be cost prohibitive and technically daunting.

A revised proposal, which would save four buildings from the wrecking ball and lower both the new hospital tower and the condominium by about 30 feet each, has won the approval of Manhattan borough president Scott Stringer and City Council speaker Christine Quinn. But community groups and preservationists still object to the scale of the proposal and want the O’Toole Building preserved as a significant contribution to Modernist architecture. No decision was made yesterday, and the commission planned another hearing for July.

#condo
#demolition
#landmarks
#plan
#proposal
#renderings
#st vincent's
Do you know the scoop? Comment below or Send us a Tip
A new Gothamist is coming! We’ve moved comments over to our beta site. Click here to join the conversation and get a preview of our new website.