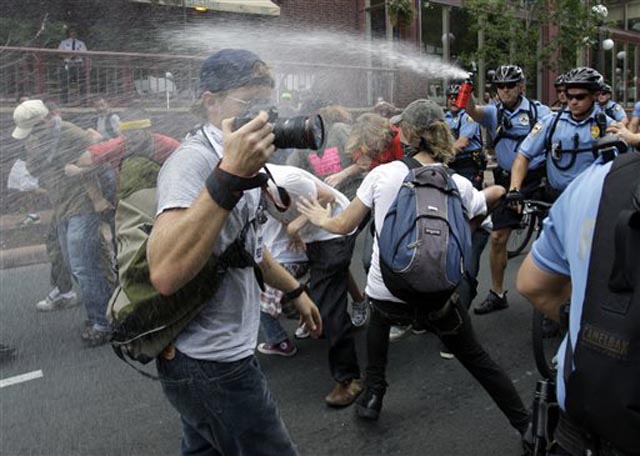 Police use pepper spray to break up a group of protesters during a rally at the Republican National Convention in St. Paul Monday. (AP Photo/Matt Rourke)

The Post has a funny editorial today about how St. Paul police could have avoided all "the ugliness that's marred the GOP convention this week" by taking some tips from the NYPD's "effective" management of the 2004 RNC protests. Of course, St. Paul officials did consult with the NYPD before the convention, and their raids on protesters' homes seem partly inspired by the NYPD's pre-convention spying in 2004. But according to the Post, demonstrators in St. Paul are now "pining for the apparently gentler tactics of the NYPD."

And furthermore! The Post says it's unfair how cops "took much heat from the lefties" after the New York RNC; after all, the mass arrest of over 1,800 demonstrators was the simply the only way the NYPD could "maintain control - so that lawful protesters could exercise their First Amendment rights." By that logic, St. Paul police need to kick it up a notch; they've only hauled in an estimated 300 people so far. Sure, looking for logic in the Post is a fool's errand, but you'd think the tabloid would at least be happy with all the rubber bullets, pepper spray and concussion grenades aimed at these "trouble-making morons." After the jump, some video of St. Paul's finest in action.

Wired has more on the clashes between police and protesters.