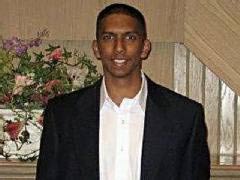 The 22-year-old St. John's University student who brought a loaded .50 caliber rifle to the Queens campus on Wednesday was arraigned in his hospital room at Bellevue yesterday. Communicating via a video link to the Queens Criminal Court, Omesh Hiraman appeared "frail in his blue pajamas" (NY Times), while he "hands shook and he "rocked back and forth" (Daily News), but seemed lucid during the proceedings. Judge Deborah Stevens Modica ordered that he be given a psychiatric evaluation to determine his mental fitness.

It seems that Hiraman, who graduated from Stuyvesant High School and attended Cornell before dropping out and returning to NYC, had traveled to Manhattan in search of the Fred Flinststone mask he wore Wednesday afternoon. He then took a cab to his family's Queens home, where he picked up the antique Wolf rifle and took another cab to St. John's.

Hiraman's lawyer, Anthony Colleluori, had said his client suffered from schizophrenia. Yesterday, Colleluori said that Hiraman also suffered from post-traumatic stress after witnessing the World Trade Center attacks on September 11 at Stuyvesant: "He's a good kid who sacrificed a lot of himself during hard times for our country when it mattered and I'm not losing sight of that." Queens DA Richard Brown said, "The defendant is clearly a very troubled young man."

St. John's has been earning praise for keeping its students, faculty and other employees aware of the situation on Wednesday with its emergency message system. Police Commissioner Ray Kelly said, "The University’s response yesterday serves as a national model." He pointed out that one of the people helping to restrain Hiraman, police cadet and St. John's Chris Benson, received his text alert message while struggling with Hiraman. "No one wants to go through the frightening experience that occurred at St. John’s. However, if it does happen…this is the best outcome possible. No one was injured. And the emergency response both by the Police and the University was flawless."