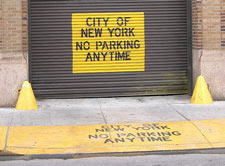 One of the lead detectives in the murder of Imette St. Guillen was ticketed and suspended for using a photocopied parking placard in Brooklyn last week. The ticket was issued in front of the Brooklyn Supreme Court, where Det. Sean McTighe parked in front of a fire hydrant.

According to Daily News sources, the detective, a member of the Brooklyn North Homicide Squad, was on duty when he parked his personal car in front of the courthouse with a photocopy of his official placard on the dashboard. Union officials are calling foul on the suspension--30 days without pay--saying that McTighe was going to court for trial preparation, but was using his own car because of a limited number of patrol cars. The union is also trying to get McTighe placed onto modified duty.

McTighe is one of the lead detectives in the murder of Imette St. Guillen, a John Jay graduate student who was raped and murdered, allegedly by the bouncer at a SoHo bar, who dumped her body in Brooklyn. Since Mayor Bloomberg announced a crackdown on the use of unauthorized parking placards--which contributes to the nightmarish state of parking in the city--the NYPD has handed over enforcement of police use of placards to the Internal Affairs Bureau.

Image from CITY OF NEW YORK NO PARKING ANY TIME, by Triborough at flickr

#brooklyn
#enforcement
#manhattan
#murder
#parking
#placards
#The Falls
Do you know the scoop? Comment below or Send us a Tip