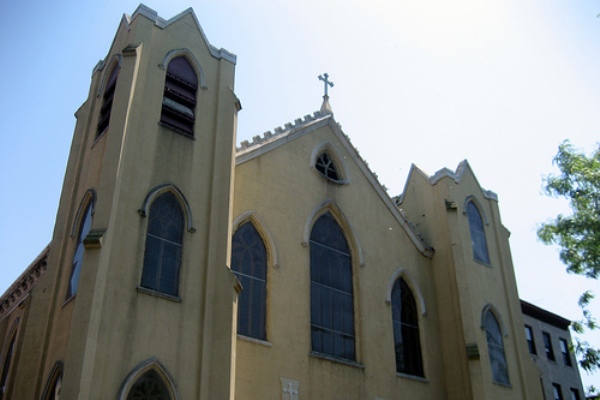 It's a $20 million miracle for an East Village church slated for demolition! An anonymous donor has given a multi-million donation to the struggling parish and its school: There's $10 million for the restoration of the the church, $2 million for a parish endowment and $8 million to support St. Brigid's school and other Catholic schools.

With a cornerstone laid in 1848, St. Brigid's is one of the oldest houses of worship in Manhattan, but the archdiocese closed it in 2001 (the parish was closed in 2004). The fight to save it has been going on for 2 years (see the Save St. Brigid's Now website).

While the donor is anonymous, Archbishop of NY Edward Cardinal Egan did tip off it was a man who met with him in a private meeting, "This magnificent gift will make it possible for Saint Brigid’s Church to be fittingly restored with its significant structural problems properly addressed. The two additional gifts, to create an endowment for the parish and to support the parish school, are a powerful testament to the donor’s goodness and understanding."

#anonymous
#Cardinal Egan
#Catholic Church
#church
#east village
#NY Archdiocese
#St. Brigid's
#St. Brigid's Church
Do you know the scoop? Comment below or Send us a Tip
A new Gothamist is coming! We’ve moved comments over to our beta site. Click here to join the conversation and get a preview of our new website.