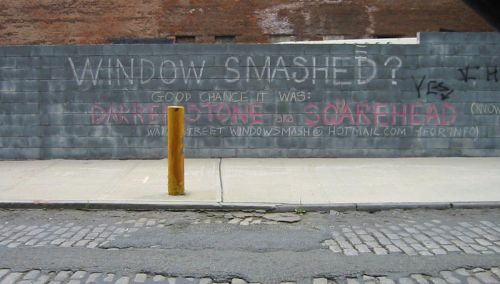 Last month the massive amounts of smashed car window glass on Water Street in DUMBO got some attention online, and a blog of its own. Across the cobblestone street from some of the victimized cars a sign appeared on a wall saying the culprit was likely Darren Stone, aka Squarehead. Now the The NY Post reports that the 43-year-old Stone has been arrested for felony criminal mischief after cops used DNA evidence from one break-in where he cut himself.

Stone has a rap sheet covering nearly 25 years and now faces 7 years in prison; cops in the area told the Post, "We arrest that guy once a month." They also noted that he "began stealing as a teen and never stopped. He earned his nickname for stubbornly keeping at it, even though he gets arrested constantly."

Meanwhile, DumboNYC reports that the break-ins are occurring even with Squarehead being held on Rikers! "Despite catching the criminal, several residents continue to report break-ins on early Sunday morning. There were car break-ins on Front Street (between Bridge and Hudson Streets) and several on Water Street. According to officers, they had counted 15 break-ins."

#car windows
#crime
#Darren Stone
#dumbo
#Squarehead
#water street
Do you know the scoop? Comment below or Send us a Tip