The new complex, planned by Williamsburg-based developer All Year Management, will span two blocks and include 800 to 900 units. All Year purchased the land from Read Property Group in two separate transactions: the group purchased 123 Melrose Street for $68.5 million in November of last year, and adjacent 28 Stanwix Street this April for $72.2 million.The development will be named "Bushwick II," presumably because the first version of Bushwick was so popular they couldn't resist making a sequel, this time with twice the gentrification.

The best thing about Bushwick II? Residents will be able to enjoy an authentic pioneer's life in Bushwick without ever leaving their compound and setting foot into the rest of neighborhood, where 32% of households fall below the poverty line.

According to The Real Deal, the new development will include "a complex system of interconnecting courtyards and common spaces" as well as coffee shops, art galleries, lounges, and fitness areas. The 60,000 square-foot roof will include an urban farm as well as recreational and exercise spaces. And an 18,000-square-foot park will run through the center of the building, making the nearby Garden Playground and Green Central Knoll redundant. 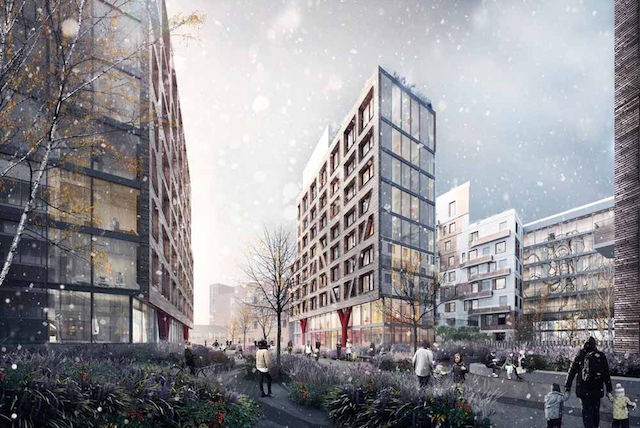 ODA, the architectural firm which also designed the development at 10 Montieth, described Bushwick II as having been inspired by a European village, because as we know, most European villages are made of glass and steel.

"By interrupting the rigid order of a typical NYC street grid and blending it with the sequencing of a European village, the path becomes a meandering courtyard rather than a direct line from A to B," ODA's founder Eran Chen said in a statement.

At a local community board meeting earlier this week, Councilmember Antonio Reynoso stressed the importance of ensuring that Bushwick continues to have affordable housing. "We need to make sure that the 3-family homes on the block stay there, that people don’t buy 4 properties and build 1 tower in the middle," Reynoso said.

Don’t worry, 20% of the 800 to 900 units will be "affordable" housing. However, if there's anything we've learned from previous installations of the Rheingold site saga, private developers have been known to sell off their properties to other private developers, unhindered by pesky affordability requirements. As Bruno Daniel of the neighborhood advocacy group Rheingold Construction Committee (RCC) told Gothamist last year, "A developer's word isn't worth so much."

The future may not be affordable, but at least it's shiny and vaguely European.

#brooklyn
#bushwick
#gentrification
Do you know the scoop? Comment below or Send us a Tip