Spotting Signs Of Life On The Poisoned Waters Of Newtown Creek It's easy enough to forget about Newtown Creek, the infamously polluted tidal estuary that sloshes and stagnates across half a dozen neighborhoods, carving a jagged path from the East River mouth at Greenpoint and Hunter's Point, meandering through Maspeth and Sunnyside and Ridgewood all the way through East Williamsburg to Bushwick. For nearly four miles, the creek forms the largely unseen border between Brooklyn and Queens, and it's almost entirely cut off from the local communities by the industrial and commercial properties that occupy 11 miles of shoreline.

Given its incredibly toxic legacy, there's never been widespread public demand for access to Newtown Creek's poisoned waters. When it comes to Newtown Creek, most New Yorkers seem inclined to forget about it. This history of abuse and malign neglect began in earnest during the industrial revolution, when its banks were overtaken by the city's freely-polluting hide tanning plants, canneries, and various manufacturing and chemical facilities, which all dumped whatever they wanted into the creek.

Oil refineries, led by Charles Pratt in 1867, eventually made the creek completely lifeless. The worst ecological devastation came with a series of oil spills that ultimately created an underground plume of oil beneath 50 acres of eastern Greenpoint. And the pollution continues to this day, with combined sewer runoff frequently spewing into the creek. 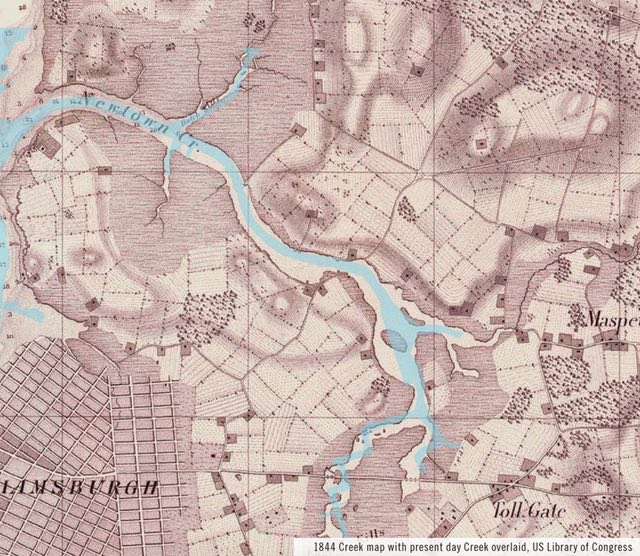 But Newtown Creek is not ruined beyond repair. Despite its long history of industrial abuse, resilient signs of life continue to emerge. A 2014 expansion of the giant Newtown Creek Wastewater Treatment Plant, with its towering, romantic Digester Eggs, significantly reduced the amount of sewage released into the creek, and the industrial facilities along the shoreline are far cleaner than they were in years past. Mussels cling to bulkheads in abundance, and shore birds are a growing presence.

For the most part, the water does not widely reek of toxic pollution, at least not on dry days. But when as little as a tenth of an inch of rain falls, the combined city sewage system overflows, unleashing waste directly into the creek from various discharge points. According to the Newtown Creek Alliance, some 1.4 billion gallons of Combined Sewage Overflow [CSO] is released into the creek annually. Meanwhile, the toxic stew of chemicals and heavy metals collected at the creek's bottom pose a formidable challenge to rehabilitating the creek—a monumental undertaking that's currently in the hands of Scott Pruitt's E.P.A.

Riverkeeper and the Newtown Creek Alliance have been working to rehabilitate the creek, and in March they released an ambitious Vision Plan for the estuary, which imagines a future in which the waterway becomes an accessible and clean resource for the community while also preserving its historic industrial purpose. Renderings for the Vision Plan present a holistic, environmentally hopeful future for the abused estuary, with green roofs, marshy park land, and recreational boating access.

This optimistic vision for a healthy Newtown Creek made me want to get out on the water to finally experience the creek for myself. So on a chilly, overcast afternoon in April, I met Willis Elkins, the program manager for the Newtown Creek Alliance, at the North Brooklyn Boat Club's launch under the Pulaski Bridge in Greenpoint. Tall and bearded, Elkins, 34, is a soft-spoken authority on the creek, having worked with the Alliance for nearly five years assisting the clean-up efforts, taking countless forays out on the water to gather samples for pollution studies and document fauna. He knows the wildlife that comes and goes, is adept at spotting oil seeping into the creek, and on one disturbing expedition last year, found a decomposing body on the shore of the creek.

Our three hour tour of the creek did not yield any grisly discoveries beyond old plastic bags. In fact, most of what we saw seemed at odds with the creek's reputation as an irreparably polluted wasteland. "The first egret of the season!" Elkins excitedly remarked as we puttered east in a little wooden boat with a detachable motor. I hadn't noticed the bird until he pointed it out, a white sentinel poised on a rocky shoreline built by the city to create a more naturalized bulkhead. Our foray also yielded sightings of a red breasted merganser, many cormorants, a great blue heron, a kingfisher, and numerous mallards—all encouraging signs that Newtown Creek is gradually becoming cleaner.

These birds may eat the fish, but humans should think twice. There is still a very long way to go bringing Newtown Creek into compliance with the Clean Water Act, which mandates "fishable, swimmable" waters nationwide. The E.P.A. is inching toward the end of a years-long study that will eventually prescribe a clean-up plan as part of the federal Superfund process, but Newtown Creek remains one of the most polluted waterways in the country.

According to the E.P.A., the city began dumping raw sewage directly into the creek in 1856, and by the end of the 19th century, the city of Brooklyn counted at least 37 heavy metal manufacturing and industrial operations releasing high levels of contamination into Newtown Creek—animal rendering and glue manufacturing facilities, paper plants, petroleum and gas operations, and dye and chemical works. During WWII, Newtown Creek was one of the busiest ports in America, with the government commandeering factories for the war effort. 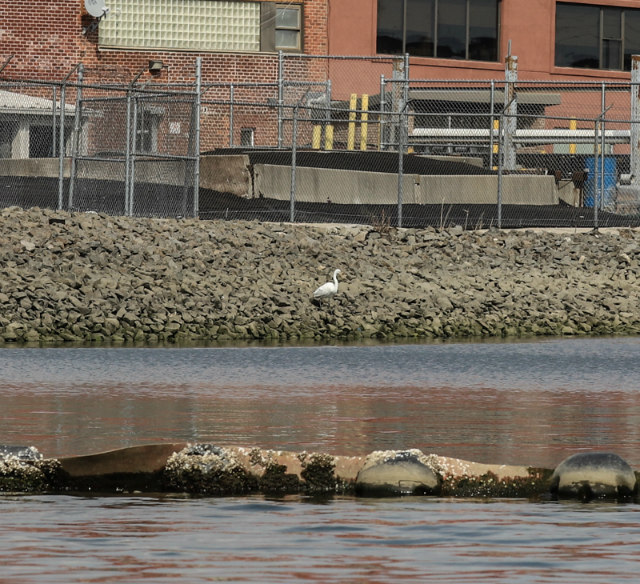 The pollution continued unchecked throughout much of the 20th century as ExxonMobil (formerly Standard Oil) and other refineries liberally spilled oil into the creek. In 1978, the Coast Guard spotted oil flowing into the creek, prompting the discovery of what was then the largest oil spill in the nation's history—a gigantic underground plume of oil that had spread over the course of 140 years of spills. There are still spots along the shoreline where booms block off oil seeping into the creek, holding the oil in place until it's periodically removed.

ExxonMobil, BP, Chevron/Texaco, Phelps Dodge, National Grid, and the City of New York have been named as the six "Potentially Responsible Parties" for cleaning up the creek as part of the Superfund process. As of last year, some 12.9 million gallons of oil and oil products have been recovered from the soils beneath Greenpoint and Newtown Creek, out of an estimated total of as much as 30 million gallons. That work will continue as the E.P.A. prepares the Superfund cleanup plan. But this extensive remediation, which will presumably involve removing the toxic chemicals that line the creek bottom, is not expected to begin until 2030.

The E.P.A. did not answer our questions about the current state of the Superfund process, and why the cleanup is not expected to begin for over a decade. 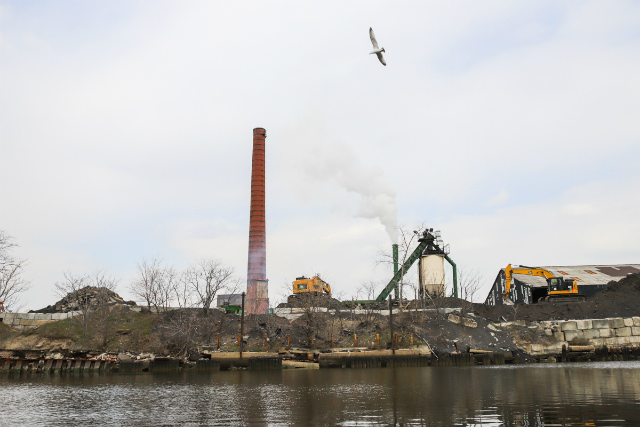 Mitch Waxman, a photographer and writer who serves as the official historian for the Newtown Creek Alliance, worries that under President Trump and Pruitt, the E.P.A. will thwart the creek's recovery by going easy on the Potentially Responsible Parties. (Community activists who live near other Superfund sites share Waxman's concern.)

"Without the active industrial pollution continuing, since really the 1990s, the ecology of the creek has been recovering nicely," Waxman told Gothamist. "Nature is indomitable and ultimately it's going to win. The question is how long it's going to take them to get the buried poison up out of the water. That's what the Superfund process is about. That's one of the causal concerns giving everything that's happening in D.C. right now. What sort of teeth is the E.P.A. going to have with the Potentially Responsible Parties?"

In the meantime, the city's Department of Environmental Protection is partnering with local residents to reduce Combined Sewage Overflow during rainstorms, enlisting volunteers to sign up for an alert system that urges them not to flush or shower until an all-clear is issued. The alerts are triggered when half an inch of rainwater is detected by the city's gauges, and the DEP says 700 local households are currently participating, yielding a five percent reduction in water use during the pilot phase.

The community's Vision Plan offers more ways for reducing the sewage overflow events. These include incentivizing local businesses to install green infrastructure to absorb storm water before it can overwhelm the sewer system, adding green roofs, rain gardens and rain barrels along the shore line. Renderings for this possible future of Newtown Creek show a vibrant balance of rehabilitated green shorelines, "living bulkheads" to encourage aquatic wildlife, and even restored marshland at the end of one unused creek tributary that terminates in Maspeth. 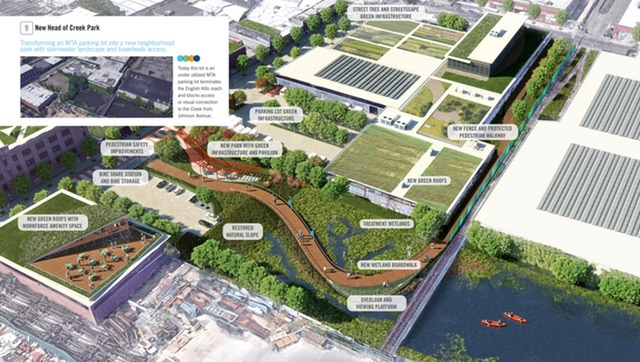 A park proposed by the Newtown Creek Community Advisory Group at the site of an MTA parking lot at the end of English Kills tributary in Bushwick. (Perkins + Will)

The Newtown Creek Alliance is intent on preserving the creek's historically industrial use, but as cleanly as possible. A million tons of freight travels by barge in and out of the creek every year—scrap metal and recycling and other waste that would otherwise be transported by carbon-spewing, traffic-clogging trucks.

Metro Energy operates a fuel storage facility on the creek, where barges bring fuel for transport to gas stations. Broadway Stages operates a film and television studio on the banks of the creek—as our boat passed by workers outside were building a set for the forthcoming TV series "F.B.I."—and one of their sound stages on the Brooklyn side of the creek boasts a publicly-accessible green roof. Waste transfer stations sort recycling and trash to be barged down to the recycling facility in Sunset Park. Scrap metal and asphalt plants continue to load up barges daily, and DEP sludge boats transport processed sludge from the Wastewater Facility to Wards Island, where it's spun into biosolids "cake" and shipped to landfills. (One recent shipment is turning into a nightmare for a town in Alabama.)

Many places along the shoreline retain that bleak, alien feel of an industrial wasteland, like where a magnetic crane sifts scrap metal beside an old animal rendering smokestack. But in other spots, where trees grow near crumbling bulkheads bulging with mussels, nature reasserts herself and you can see how, with the right stewardship, life on the creek could be renewed.

In fact, the renewal is already happening. Near the end of our tour, as we headed back toward the mouth of the creek, Elkins spotted a cormorant flying toward the East River with a tree branch in its beak. "It's carrying that stick to a tiny island across from the U.N. where they nest," Elkins observed. It was one more reminder that Newtown Creek is an integrated part of the New York ecosystem, whether we ignore it or not.

If you're curious about seeing the hidden life of Newtown Creek for yourself, the North Brooklyn Boat Club holds regular free canoe excursions. And here are details about the Newtown Creek Nature Walk.

#newtown creek
#newtown creek alliance
#superfund
#original
Do you know the scoop? Comment below or Send us a Tip