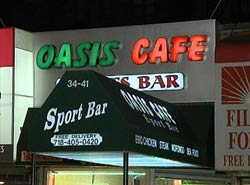 Police netted the suspected gunman in a shootout that brought some real March madness to a Bronx sports bar Sunday night. Luis Paulino was arrested and charged with murder, attempted murder, and criminal possession of a weapon for opening fire on the patrons and staff of the Oasis Cafe, which is located on Jamaica Avenue in the Norwood neighborhood of the Bronx.

Paulino reportedly was having an argument with another patron at the bar and stormed out. When he returned a short time later, he was firing a pistol indiscriminately before he even got through the front door. The intended target escaped unscathed, but 25-year-old Manuel Saico was shot in the chest and killed. Another man was shot in the torso and is listed in serious condition at St. Barnabas Hospital, according to WNBC News.

Saico was an immigrant from Ecuador who was working construction, and had simply stopped by the Oasis Cafe to get something to eat. Paulino was identified as a former worker at the business. It's still unclear what he and his intended victim were arguing about that sent him to get a gun and open fire at the bar.

#attempted murder
#bronx
#gun
#murder
#norwood
#oasis cafe
#shooting
#sports bar
Do you know the scoop? Comment below or Send us a Tip