Video of the horse, named Oreo, after the incident

According to the NY Post, the Central Park carriage horse was pulling two tourists when it broke free, crashed into a parked van and a moving car, and took off down the street. It was then restrained by the police, which we obtained video of from NYCLASS, who advocates a ban on carriage horses—watch that above.

According to one witness, driver Mehmet Dundar was turning the horse, named Oreo, around from the outside of the carriage when the incident occurred, but he held on as the horse took off. When the carriage eventually crashed, it broke and the couple fell out—they were taken to St. Luke’s Hospital and are in stable condition, according to CBS. The six-year-old horse was checked out by his vet and ASPCA investigators, and the Horse and Carriage Association of New York City tells us that Oreo "is resting comfortably in his box stall in his stable on 52nd Street with only minor scrapes and bruises." The driver, they say, has "an injured leg." 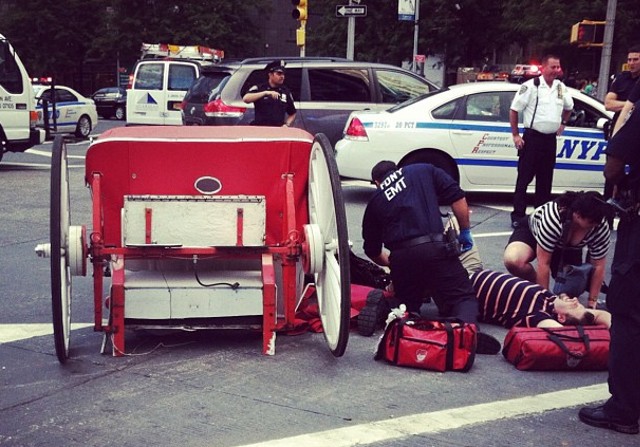 This weekend the Coalition to Ban Horse-Drawn Carriages is holding an emergency protest, calling upon Mayor Bloomberg and Council Speaker Christine Quinn to shut down the horse-drawn carriage business in New York. This will take place on Saturday at 1 p.m. at the northwest corner of Central Park South and 5th Avenue. President of the Coalition, Elizabeth Forel, says, “So far, NYC has been lucky since no one has died in a horse-drawn carriage accident—YET. This has not been the case in other cities. It could happen here because conditions are ripe for it. The horses are accidents waiting to happen.“