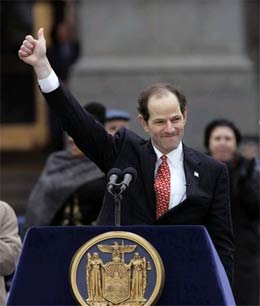 Governor Spitzer may have been proud of not doing things the usual Albany way at the beginning of his term, but in the wake of Troopergate and other missteps, he's apparently desperate for support. So desperate that he's turned to lobbyists.

According to the NY Times, there's been a distinct shift in how the Spitzer administration works with lobbyists. While the staff doesn't favor certain lobbyists (the way Governor Pataki's did), the administration seems to have realized lobbyists can be useful in trying to get deals made, as well as being a "key source of political intelligence." Wow, it's only taken Spitzer et al. to realize how the Albany game, however, unfortunately, is played! And though some Spitzer administration officials still "keep lobbyists' at arm's length," we find the shift interesting, especially since former communications director and Troopergate player Darren Dopp is now working for a lobbying firm.

Speaking of Troopergate, sources tell the Post that investigators think Spitzer's computers may have been "scrubbed clean" of information related to plans to smear rival State Senate Majority Leader Joseph Bruno. Bruno has had his own share of problems - after rumbling about conflicts of interest, he just quit a consulting gig for a company that handles investments for unions (Bruno has backed legislation those unions sought!).