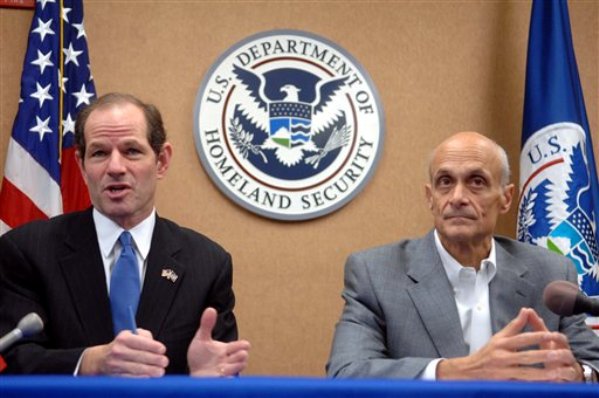 Even though he has amended his plan to give illegal immigrants the opportunity to get driver's licenses, Governor Spitzer can't make everyone happy.

The governor's new plan has three tiers: There will be the Real ID (the one passed by Congress in 2005 - the very program Spitzer's own Homeland Security director criticized last month) which will be offered to citizens and legal immigrants, plus, per the NY Times, "an enhanced driver’s license that New Yorkers who are citizens could use to cross the Canadian border without a passport, and a less expensive, limited license available to illegal immigrants and others that would not be a valid federal identification."

However, state Republicans are still skeptical of the tiered plan; State Senate Majority Leader Joseph Bruno's spokesman remarked, "There is more opposition now across the board than there was before he flipped." And some Democratic politicians, immigrants' rights and civil rights advocates think it's a stunning betrayal of the governor's earlier commitment to immigrants - not to mention the fact that illegal immigrants may not even opt to get this kind of license. The NYCLU's Donna Lieberman had damning words for the new plan, which included, "By supporting Real ID...the governor is handing over the personal information of all New Yorkers to the president with the worst record on civil liberties in the history of the United States."

Of course, there are some people who are happy: Secretary of Homeland Security Michael Chertoff, Mayor Bloomberg, and different state police unions. Spitzer tried to use the Metrocard as a metaphor when discussing the plan with NY1: "I don’t think it is a privilege any more than buying a MetroCard is a privilege. When we walk down into the subway system to but a MetroCard, no one says, ‘Prove you are a citizen;’ no one says, ‘Where did you grow up?’ It is a document that reflects a payment you paid to get onto the metro – the subway."