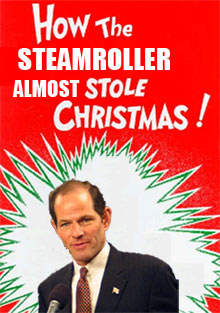 Governor Eliot Spitzer had a busy week. Not only was he working himself up to admit his driver's license plan would not pass, Spitzer suggested instituting the state's 8.375% sales tax on Internet goods - just in time for holiday shopping! But only hours after the NY Sun reported on the plan, Spitzer changed his mind, deciding to wait until the new year to implement taxes on Internet purchases.

Currently, online retailers who don't have a physical presence in a state do not charge sales tax (and NY State residents are expected to self-report their online purchases on their tax returns but usually don't). But the new plan would have more aggressively gone after New Yorkers who direct sales to out-of-state entities. Here's the example the Sun used:

It wouldn't take much more than a fringe novelist from Brooklyn plugging his latest book on his Web site— and providing a link to Amazon.com in exchange for a commission of the sales— to force the online bookseller to collect a sales tax from every New Yorker who makes a purchase.

Spitzer's budget director Paul Francis told the Sun that plan was abandoned for now because "Governor Spitzer believes that now is not the right time to be increasing sales taxes on New Yorkers." And he shelved it before state Republicans got to the issue - they were going to call it a "Grinch tax"!

Spitzer told Brian Lehrer, "it was just a uniquely bad moment to roll that out." That's our Governor, listening to the public! [Via The Politicker]