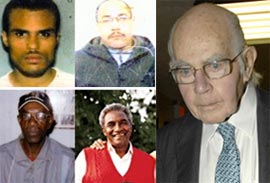 In a Bronx courtroom yesterday, 84-year-old real estate developer Bernard Spitzer insisted four black employees at one of his apartment buildings were not fired due to their race. The father of the former governor said, "If I see a doorman, I see a doorman - I do not see a white doorman or a black doorman... I don't see the blackness or whiteness or pinkness or yellowness of a doorman. I have a mind that focuses on the fact that a doorman operates as a doorman."

Four former employees at 150 East 57th Street, Anthony Haydenn, Akim Rodriguez, Leonard Boyce, and Trevor Morris, filed a lawsuit against Spitzer and the building management company in 1999, claiming that they were victims of discrimination, noting they were, as the NY Times reports, "replaced them with whites or light-skinned Hispanics." (The building management company has settled with the plaintiffs already.)

A former (white) employee testified that the building super--who Spitzer personally hired--said, "I'm getting rid of all the black n-------." But Spitzer claims he only knew they were fired when he was sued.

An interesting footnote: Roger Stone, the GOP operative who may or may not have left a memorable voicemail message for Bernard Spitzer, is giving free legal and PR advice to the plaintiffs. He told the Daily Politics he's not helping them because of his distaste for Eliot Spitzer, "I think it is coincidental that they are wronged by the father of this guy who wronged the voters of this state. All I want is justice for four indigent black men and I will be happy. The rules apply for all Spitzers like they do for all Americans. There's one set of laws and they apply for everyone, even the wealthy."

#Bernard Spitzer
#discrimination
#doorman
#lawsuit
Do you know the scoop? Comment below or Send us a Tip