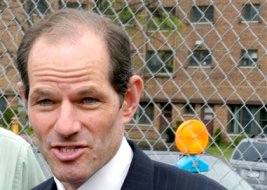 Governor Eliot Spitzer's "ChopperGate" has more of a stink today: It turns out that two of his senior aides refused to speak with the Attorney General's office during the investigation. While the investigation ultimately found that Spitzer aides didn't technically break the law when they were trying to use State Police records to discredit State Senate Majority Leader Joseph Bruno, it makes it hard to believe Spitzer's assertion that his aides had cooperated fully with the AG's office.

Spitzer's communications director Darren Dopp and chief of staff Richard Baum are "refused" to answer questions (in both in-person interview or in written form), only offering sworn statements. The Post notes, "By avoiding answering questions under oath, Baum and Dopp thwarted possible inquiries from probers about whether Spitzer was aware of the plot against Bruno."

According to the Daily News, Spitzer claimed "he didn't know Baum and Dopp wouldn't talk to Cuomo's probers," offering only, "Those decisions were left to the attorney general's office and lawyers in my office." Spitzer also said, "When you go into a job like this, you have to expect unpredictable crises - but that is the nature of the position. It's not going to slow me down. Whether it will distract others, we will have to wait and see." Mister, your closest aides were conspiring to use state resources to bring down a rival - of course that's distracting. 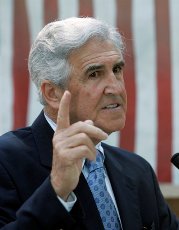 Bruno just gave a press conference, where he was supremely pissed off, but also probably pleased as having the chance to tear into Spitzer's public image. From the CityRoom:

Mr. Bruno lashed out against Mr. Spitzer’s charged and confrontational style, mocking the governor’s now-famous description of himself as a “steamroller.”

“Stop being so confrontational, so militant, so aggressive,” Mr. Bruno said as if to lecture the governor, before adding: “The steam is gone from the steamroller. The wheels have come off the steamroller.”

Of course, Bruno, along with other Senate Republicans, wants a full investigation into the matter. Keep in mind that state rules about officials using state aircraft will likely be revised, after it was found that Bruno's 30 minutes of state-related work in NYC justified a day's use of state aircraft and state police. A Senate Republican insinuated that Albany paper Times Union worked with Spitzer's aides to bring us ChopperGate, but the Times Union says they were nonpartisan, aggressive and part of covering the capitol. Ah, dysfunctional Albany!

The Daily News' Michael Goodwin has a fascinating piece about Spitzer's character: Back in 1998, Spitzer lied to the Daily News Editorial Board when asked where he got money for his Attorney General campaign; Spitzer told them he had taken out loans, but then just before the election, he told another outlet his father had given him the money.