Spitzer's Aide Doesn't Want to Give Up His E-mails 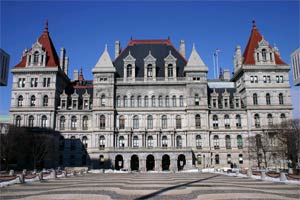 Darren Dopp, Governor Spitzer's communications director who was faulted for at least co-devising a plan to smear State Senate Majority Leader Joseph Bruno by way of State Police records, is planning on fighting a subpoena from the State Ethics Commission. The subpoena, which asks for Dopp's email that relates to the scandal (beginning January 1, 2007, Spitzer's first day, until a few days ago), is described as "very broad" by Dopp's lawyer Terrence Kindlon who told the NY Times, "It asks for a lot of information that isn’t really mine to give, including correspondence with ink-stained wretches [as in reporters!]. Prudence dictates that we ask a court to look at this and determine what is being legitimately requested.”

This is a turnaround from Dopp's earlier claims that he wanted to tell his side of the story. Most notably, the Ethics Commission wants emails between Dopp and the NY Post's Fred Dicker which are important because Dopp had claimed a conservative party leader wanted State Police records of Bruno's travels, only for Dopp to deny all - and then in the end, it was revealed that Dopp and another Spitzer aide had requested the State Police records. The Times asked Bruno's spokeman John McArdle for a comment about the apparently subpoena-fight and got, "Terry Kindlon is not a credible source. We’re not going to react to that.”

Darren Dopp returned to work, after a one-month suspension without pay (he's paid $175,000/year), in late August but he hasn't actually been at the office - he's been using vacation time. Last week, he was questioned by the Albany DA's office and apparently handed over some personal e-mails at that time.

A Daily News editorial asks for Dopp to cooperate, "Dopp owes the public a full reckoning."