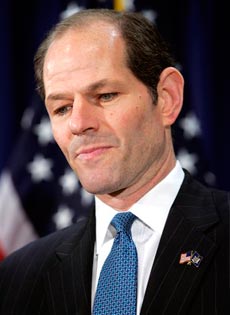 Former governor Eliot Spitzer has come back into the public eye with an editorial in the Washington Post called "How to Ground The Street". The WaPo subheadlines the editorial,"The Former 'Enforcer' On the Best Way to Keep Financial Markets in Check," but let's face it--most people know him as the 'Steamroller' or 'That Governor Who Had to Resign Because He Regularly Saw Prostitutes.'

Oh, sure, Spitzer reminds everyone of his Enforcer days, mentioning how he as Attorney General was accused of "meddling in the markets" or how he and the Department of Justice were "jeered" for warning about AIG's dealings. Spitzer also gives his prescription for what should be done to remedy the mess, like reexamining corporate governance systems and overhauling the current federal financial regulatory framework.

He ends with, "Although mistakes I made in my private life now prevent me from participating in these issues as I have in the past, I very much hope and expect that President Obama and his new administration will have the strength and wisdom to do again what FDR did."

The NY Post harkens back to Spitzer's downfall with an article by Natalie McLennan, the $2000/hour hooker who worked with Spitzer hooker Ashley Dupre back in the day. McLennan says it's a double standard that hookers get prosecuted while johns rarely do, "Clients who, like Spitzer, have full knowledge of the laws they're breaking but don't hesitate to do so over and over again? It's obvious that when Spitzer participated in his illegal activities, he was acting under the assumption that the so-called 'sheriff' was above the law. Apparently, he was correct."

#ashley dupre
#eliot spitzer
#Enforcer
#prostitution
#steamroller
#wall street
#washington post
Do you know the scoop? Comment below or Send us a Tip