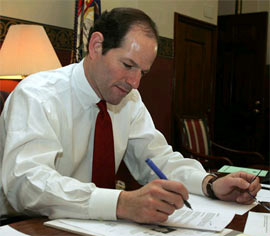 The NY Times reports that Governor Eliot Spitzer is working on an "ambitious and potentially expensive push to expand health coverage to nearly three million more residents." With 15% of the state's residents uninsured, universal health care was one of Spitzer's campaign promises last year. He has also openly criticized the state's health system, saying billions of dollars are pumped into a "broken system with no deliverables and no accountability."

According to the Times, Spitzer's administration has been studying others states' experiences with expanding health care. The Governor said, "We’re being practical and pragmatic rather than making a sweeping rhetorical flourish." Public hearings are planned starting in August, and his administration will start asking consulting companies to look at various coverage programs. Naturally, there are many challenges: The State Senate would need to approve the many steps it would take to develop a plan and New York has many "more low-income and uninsured residents and a smaller percentage of employer-sponsored insurance programs than Massachusetts," which has a wider health care plan, has.

Some more details about how Massachusetts' attempt to expand its health care program has spurred other states to do the same from the Congressional Quarterly. And Spitzer discussed health care reform in his state of the State: "...within four years, we will further cut the number of uninsured. Using a new streamlined enrollment process that guards against fraud, we will enroll the 900,000 uninsured Medicaid-eligible adults."