It's been quite a week for Eliot Spitzer. On Sunday, the tabloids revealed that the married former governor is dating his former spokeswoman/Mayor-elect de Blasio's current spokeswoman. On Tuesday, he and his wife announced their "marital relationship has come to an end." And yesterday, he spent Christmas with his new girlfriend's family in Bronxville. Naturally, the tabloids were ON IT. 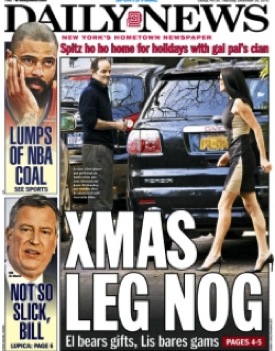 Both the Post and Daily News have photographs of Spitzer, 54, and Lis Smith, 31, visiting her parents' house. And they give Smith the fashion police treatment!

The Post, which had its columnist Andrea Peyser slutshame Smith, reported, "Arriving in a black GMC Acadia SUV at around 10 a.m., Smith emerged in shiny black stilettos and a form-fitting, sleeveless black-and-tan mini dress more suitable for an 80-degree day than Wednesday’s nippy 24."

The Daily News described, "Smith, who was Spitzer’s flack during his failed run for city controller this summer, looked dressed for a late-night soiree in Manhattan instead of a modern-family gift exchange in the suburbs. She wore a tight two-tone little cocktail dress that came to mid-thigh and showed off the goosebumps on her bare shoulders in the frosty weather. Wearing black stilettos, she stood almost as tall as the 6-foot Spitzer, who was dressed in casual attire — a navy pullover sweater with the sleeves rolled up, a pair of tan trousers and black loafers. He held a pair of reading glasses in his left hand."

According to the Post: "Sources close to Spitzer and Smith said their relationship began to get serious in October when he first met her skeptical parents and later her siblings. Spitzer then introduced his leggy former spokeswoman to his own close relatives. and the increasingly confident couple began openly socializing within their respective circles."

The Post adds that both their fathers have Parkinson's disease and a source says that Spitzer "has served as a rock for her as her family has come to terms with the disease’s debilitating effects."

Smith was reportedly being considered to become de Blasio's mayoral press secretary; it's unclear whether her relationship with the technically-still-married governor will impact that decision. In a statement issued earlier this week, de Blasio said, "I respect Lis as a professional but I also respect herright to privacy. I think I’m getting my message out just fine."